A vital and fuel-efficient workhorse on many construction sites where substantial loads need shifting, but manoeuvrability is also required, site dumpers’ latest releases respond to the need for low or zero emissions. Meanwhile safety features to eliminate common risks such as tilting or overturning are an ongoing focus for both wheeled and tracked versions. 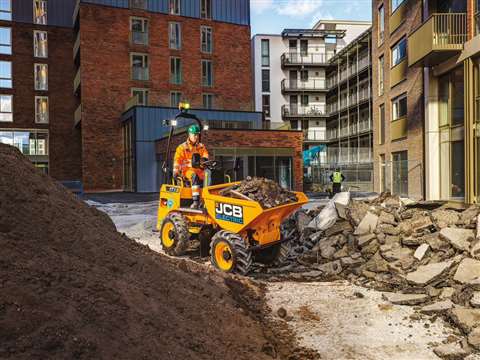 Key features include zero emissions and low noise levels, fast charge capability, full-shift operation in typical use, and a high-tip skip design to allow loading into skips and larger containers.

“The 1T-E site dumper is a durable, compact machine with a full steel skip and heavy-duty articulated chassis. The machine replaces the individual wheel motors of the hydrostatic 1T-2 with conventional drive axles and a drop box, to provide full-time all-wheel drive. A 7kW hydraulic motor delivers drive to the drop box, while a second hydraulic pump is used to power the machine’s standard hydraulic circuit, for steering and skip lift.”

“Power is supplied by two 5kWh lithium-ion batteries, capable of providing full shift operation in normal use. The batteries can be recharged from conventional site electrical supplies, with 110V and 230V cables available. In addition, the optional JCB Universal Charger can be used to rapid charge the batteries for extended operation.

Meanwhile, JCB’s smaller site dumper, the 1T-2, which took out the prize for Hire Industry Product of the Year at the Hire Awards of Excellence 2021 in May, is a Stage V compliant 1.0-tonne site dumper equipped with a drive inhibit system, preventing travel unless the seatbelt is in use. It also has an initial movement alarm that provides an audible warning before forward or reverse travel commences.

Another feature is the Smart Safety pack which includes an intelligent tilt warning system using technology from JCB’s Loadall telescopic handler range. This sounds an alarm when the skip is raised with the dumper sitting on dangerously uneven ground.

There is also an option to specify the machine with a wider track for additional stability, with an increase in wheel offset to raise the width of the machine from 850mm to 988mm. 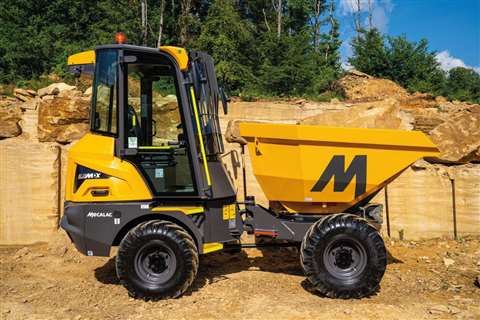 The 6MDX and 9MDX can be fitted with an isolated MDX cab to minimise vibration and noise, while optional air-conditioning provides operator well-being in all weather conditions. The certified ROPS/FOPS MDX cab has been designed and tested to withstand impacts while loading the dumper skip.

Both new models will be available with either an integrated cab or new ROPS foldable roll bar and a handle and gas strut to enable safe folding and unfolding.

Battery-powered dumpers
Italian manufacturer Messersì began working on battery-powered mini-dumpers in its Zero Emission line in 2013. It recently announced “the next step in Messersì tracked dumper projects is the new massive five tonne payload model,” the TC550d, which is currently in prototype for testing and will be presented at Bauma 2022.

The Messersi range also includes the TC120-e dumper with a capacity of 1200 kg and fully electric transmission.

Its tracked undercarriage is electrically operated with two 2 kW electric motors (one per track) powered by the battery. The track has a patented layout with tilting rollers in the central area of ​​the track to ensure a large support area and high stability.

The TC120-e also has an emergency button and electro-brakes. Its two Lithium-Iron-Phosphate battery packs have 48 cells and a power of 11.5 kW and are positioned to ensure stability.

At the larger end of the scale, positioned as an all-terrain machine, the TC350d is a 2019 model shown at the BAUMA 2019 as a prototype and now achieving uptake across Europe.

It has a 3500 kg payload and is equipped with the 180° swivel skip. Controls are pilot assisted using joysticks on the armrests of the driver’s seat, which rotates 180° to keep the operator oriented in the direction of travel. 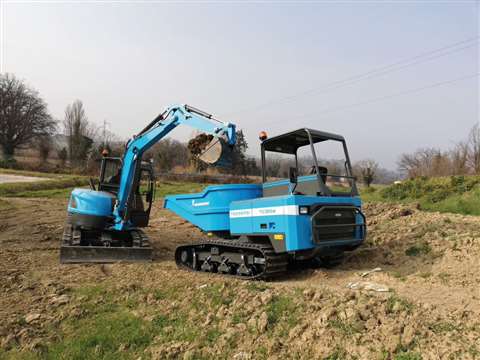 The TC350d is Messersi’s largest track dumper, with a 3500 kg payload.

It has a mixed electric / hydraulic transmission driven by a 5.5 kW electric motor powered by a 28-cell Lithium-Iron-Phosphate battery.

The undercarriage and electro-hydraulic systems have rubber tracks with a width of 180 mm and the TC50-e can overcome slopes of 30% with low noise emissions.

Full charge of the TC50-e battery (Lithium-Iron-Phosphate type) guarantees autonomy of up to six hours.

Meanwhile Hinowa, a manufacturer of tracked mini dumpers for 30 years, introduced the HS701E tracked electric machine as a prototype at Bauma 2019, delivering the first machines in 2020.

Powered by a lithium battery pack (48 V ‐ 100 Ah, optional 200 Ah), the machine meets demand for use in indoor and outdoor projects including construction work, renovations, landscaping or in historic centres with low emission zones.

It has no exhaust gases and can operate without the need for a nearby electrical outlet. The battery pack is autonomous for one working day and the machine’s compact 750 mm width makes it possible to charge the battery pack at any residual capacity without affecting battery pack life. 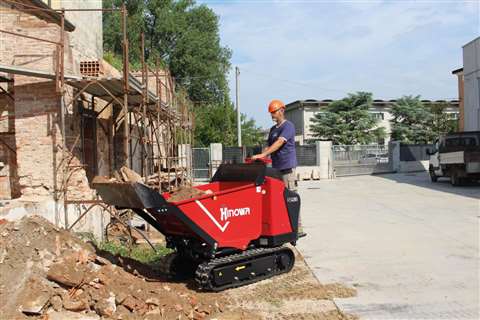 The HS1203 mini-dumper from Hinowa, “compact and versatile, agile and robust” for construction, renovation, landscaping, work in tunnels or agricultural transport.

It can carry out work corresponding up to five hours or to 18 km on a standard battery pack of 120 Ah and in ‘power” mode’. Charging time is less than three hours (230V).

Meanwhile the HS1203 mini dumper, launched at the end of 2020, is the latest evolution of Hinowa’s medium-sized mini dumper, complementing the HS1103 - a compact earthmoving vehicle with a maximum 1000 kg load capacity.

The HS1203 is described as a “compact and versatile, agile and robust tracked machine.”

It features rubber tracks with a width of 230 mm. The tracks have three rollers per side plus the slide, tensioned by a grease cylinder system.

Spanning an impressive capacity range, these releases demonstrate a category evolving to meet ever greater efficiency and safety demands. 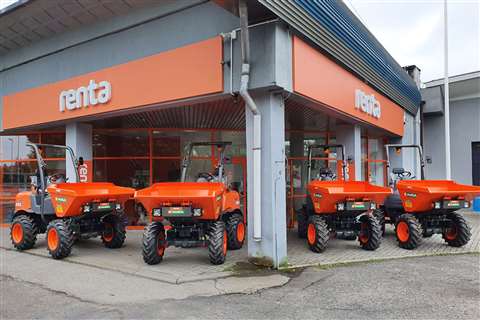 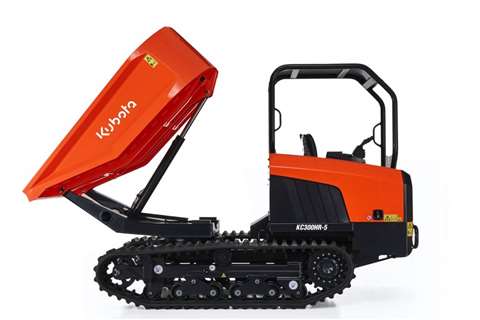