The European Rental Association (ERA) has produced a third update of its market forecasts this year and said the region’s largest rental markets will generally recover faster in 2021 than previously forecast.

Martin Seban, a Director at IHS Markit, told delegates at the ERA Convention in Amsterdam that the scale of the rebound of the global economy had been a “real surprise” and had helped improve forecasts for construction and rental in 2021.

In Germany, by contrast, ERA forecasts that growth this year will be 3.8% rather than the 4.0% published in June, with growth shifted to 2022, when the market is expected to expand by 7.0%. This is because of the time required to start infrastructure projects.

Rental growth in the Nordic region this year is expected to be around 2.7%, led by Denmark at 4.2%. In 2022, the market will strengthen to 3.9% growth, with Norway, Finland and Denmark all forecast to see +4% growth, with Sweden forecast to increase by 2.9%

Overall, Central Europe – including Germany, the Netherlands, Poland and Austria – is expected to grow by 4.0% this year and by 4.7% in 2022.

Seban said Southern Europe and the UK – among the worst impacted by the pandemic - will have to wait another year before their rental markets reach 2019 levels. 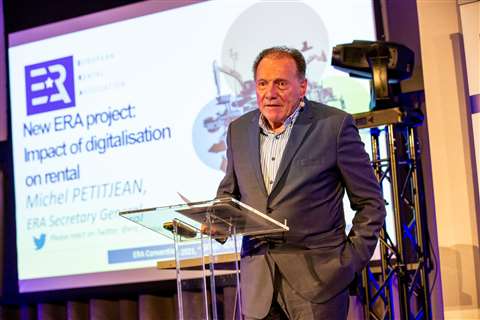 Annual market report
Meanwhile, ERA is delaying the publication of its annual Market Report because important Eurostat data for 2019 has still to be released.

The ERA usually issues its report in mid- to late-October, but is still waiting for Eurostat’s statistics on construction and industrial activity for 2019.

Eurostat issues figures with a two-year time lag, and this data is used as a base line for estimates and forecasts for subsequent years.

Michel Petitjean, ERA’s Secretary General, speaking in Amsterdam, said the organisation was still waiting for the 2019 data from Eurostat, with the hope that the figures will be available by the end of November, allowing publication of the report before the end of the year.

Petitjean said it would not be possible to delay the 2021 report beyond December, so a decision on publication date will be made by the ERA board in mid-October.

ERA Market Report 2020 update confirms regional discrepancy in Covid-19 impact
The ERA is releasing a further update to its 2020 Market Report, covering the period 2019 to 2022

Updated: Boels reports on financial impact of pandemic
2020 revenues were €1.21 billion, with EBITDA profits up 2% to €402 million