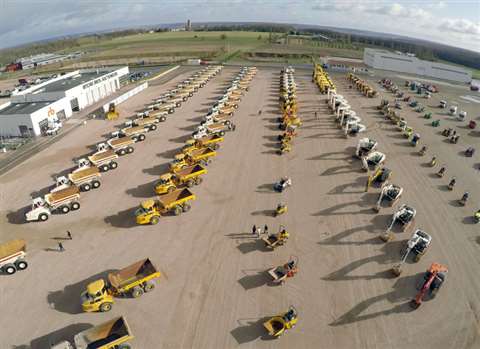 A Ritchie Bros auction in France last week attracted more than 1,575 on-site and online bidders from more than 70 countries, which the company said was a new record for its auctions in France.

Held at its site in St Aubin sur Gaillon, France, on 3 March, the auction saw more than 1,260 equipment items, tractors and trucks sold in the one-day auction, including several items from Eiffage Travaux Publics.

Bidders participated in person at the auction site, online in real time at the Ritchie Bros website, and by proxy.

Michel Schietequatte, regional sales manager, said “Our first France auction of 2015 featured a large number of premium quality units, which helped attract our biggest crowd ever. Both in our auction theatre as well as live over the internet, we saw intense bidding competition throughout the day, resulting in strong prices across all equipment categories. We also welcomed hundreds of first-time visitors, who saw the speed and global reach of Ritchie Bros auctions first hand.”

Xavier Barthelemy, equipment director at Eiffage Travaux Publics, said, “Selling this many equipment items at once can be a challenge for any construction company, but it was needed for us with the absence of major projects in France at the moment. I was impressed to see such a big international crowd bidding on our equipment.”