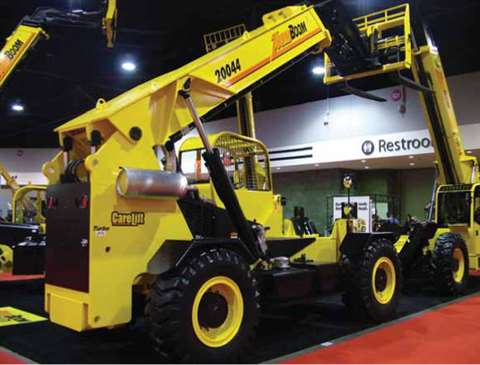 Rental companies have scaled back their investment in telehandlers in 2007 because of the US housing slowdown, but Carelift's new owner, Skyjack, says longer-term prospects for handlers remain very go

If you have been reading the financial pages recently-make that the front pages too-then you may well be thinking that the North America rental scene might be weathering a bit of a storm. Could the sub-prime mortgage problems and the slowdown in residential construction be combining to create problems for the renters?

Well, that doesn't seem to be the case, at least that's the impression being given by the chief executives of some of the largest rental companies in the region. And their positive messages are being backed up by some pretty healthy looking financial results.

Geoff Drabble, chief executive of Ashtead Group, owner of Sunbelt Rentals and A-Plant, told analysts recently that although its Florida business for the quarter to 31 July was down 10%, market conditions remain good.

“We continue to enjoy healthy market conditions. And we have a good pipeline of activity given that we are a late cycle business.” He says the consensus in the US is that non-residential construction will grow by 2,9% next year, which is below the 7,2% of 2007, but still represents growth. He says combine that with continued increases of rental penetration rates in the US and “there remains a strong opportunity for continued organic growth.”

He also has an explanation for the company's Florida slowdown: that state had the greatest overlap between Sunbelt and NationsRent stores, and so required more store mergers and closures than other territories. In addition, there has been far less hurricane related activity this year (thankfully for the residents). He says the south and east of the state, particularly around the Miami area, remain “remarkably strong”.

The pipeline projects he refers to represent contracts that have already been awarded, and he makes the further point that as much as 50% of the non-residential market is actually institutional projects-state or federal funded jobs-which are “baked in”.

Certainly, recent financial results from several of the majors point to healthy utilisation rates. Hertz Equipment Rental Corp (HERC), for example, reported record revenues and profits for its three months to 30 June and reported pricing actually rose by 0,5% compared to the same quarter in 2006.

Mark P. Frissora, chairman and chief executive officer of Hertz Global Holdings-which includes both car and equipment rental-said this growth was actually achieved despite “slower growth in some segments of the US non-residential construction market, but HERC nevertheless generated record revenues, profits and improved margins in the second quarter, and we see evidence of demand improvement in the current quarter.”

Out in the Southwest, Las Vegas-based Ahern Rentals achieved enormous rental revenue growth-24%-for the quarter ended in 30 June, and despite a very big increase in its rental fleet, the company reported a 3% rise in its rental rates. That's the ideal picture: increase your rental fleet in value from US$445 million to $610 million, and then see rates increase at the same time.

That said, the enormous investment that has been seen in the US rental sector, while clearly increasing rental revenues, is having an impact on pricing. United Rentals, the biggest of them all, saw a 1,2% fall in rental rates as its revenues rose by 5% for the quarter to 30 June. Its time utilisation improved by 3,7%, offsetting the rate fall.

“We continue to enjoy healthy market conditions [in North America]. And we have a good pipeline of activity given that we are a late cycle business.”

Dan Kaplan, writing in the quarterly AEM AdvisorRental newsletter, sees a trend for the increases in rental rates to slow down and actually predicts a rental rate decrease of 1% to 3% this year.

Further, he is rather less bullish than some of the chief executive officers; “The fleets of the major rental companies grew between 6% and 35% during 2006. In a healthy market, it would be hard to absorb this much new equipment, but this challenge is compounded by weak market conditions in several regions of the US and softness in housing starts…I expect to see lower time utilization, slightly lower rental rates and lower dollar utilizations, which will produce higher revenues and profit, but lower margins.”

This contrasts slightly with the optimistic view from the number-two player in the US, RSC Equipment Rental. Erik Olsson, the company's president and chief executive officer, interviewed at the end of August by IRN's sister magazine in the US, American Lift & Handlers, remains confident about prospects s for the sector.

“We forecast a strong year in 2007, to grow our revenues to roughly $1.8 billion … very strong results, very strong growth….we see a healthy market. I think we are in the middle of a normal, say eight year, non-residential cycle”, says Mr Olsson. “We should see a couple more, healthy growth years ahead of us. I think 2008 will be a growth year. Maybe not at the same rate as a 2007, which has been more fantastic.”

He adds that RSC's experience on rental rates is “positive rate increases, but it's been a decelerating rate. We raised our rates since early 2003 every quarter, some quarters as much as 8 or 9% on a year to year basis. We have had a fantastic run. We've seen, and called it the last 18 months or so, that this is now tapering off and we're down in the low single digits at the moment in the second quarter…it's slowing down.”

If growth remains positive for the big rental players, they are clearly bent on expanding further. Ashtead's Geoff Drabble says Sunbelt could well make small, bolt-on acquisitions in the US, and Erik Olsson says the same for RSC; “Right now, our acquisition focus is more on the smaller end of the end of the market, a lot of tuck-in type of acquisitions-three branches, five branches, 10 branches”.

He foresees, however, that the market shares of the bigger players will inevitably grow. “I think in the long term there will be more consolidation. I think the top three or four players have to have a much greater portion of the market then they have today. The top four, I think they have 18 or 19% of the market. That should be 40 percent or 50 percent… There is a lot of growth still to be had.” The company opened around 20 new depots this year and hopes to maintain that rate in 2008.

The access and telehandlers remain something of a bellweather for the rental industry. If sales are down in these sectors, you can bet that it's rental companies that have cut their spending. IRN understands from industry sources that the US telehandler market is down around 30% this year-it's a sector that is most affected by the housing slowdown-but that current expectations are that sales will rebound a little next year.

It is important to remember that 2006 was a record year for telehandler sales in North America-something like 50% higher than any previous year. So a fall this year was always inevitable and means that sales are still at a historically high level, with long term prospects still good. One manufacturer told IRN that a further fall in handler sales of

Skyjack, which recently acquired Canadian telehandler manufacturer Carelift, is also optimistic in the medium- to long-term. Ken McDougall, president of Linamar's industrial group-which includes Skyjack-said that even though telehandler sales are down this year, the company anticipates that sales in 2010 will exceed the record set in 2006.

On the aerials side, meanwhile, North American sales remain just about level, perhaps even up on last year, which, again, was at record levels for the sector. One source told IRN that sales levels next year are likely to be somewhere between 2006 and 2007 levels, which means historically very high.

If this seems a little academic, it isn't. The last time the US aerials market went down, it had a big impact on the European market, with machines flooding in to fill the gap left by the US. That might be a good thing, with delivery times on many North American products still pretty long, but European rental companies will also be extremely wary about the prospect of vast numbers of lifts suddenly entering the market. Still, if the chief executive officers of the big US rental companies are right, it won't come to that.

“Relatively little of the equipment we have in our fleet is used for residential construction. So we haven't seen any real effect on our numbers. We're 18 or 20 months into the slowdown on the residential side and our numbers are stronger than ever”.

“The fleets of the major rental companies grew between 6% and 35% during 2006. In a healthy market, it would be hard to absorb this much new equipment, but this challenge is compounded by weak market conditions in several regions of the US and softness in housing starts.”