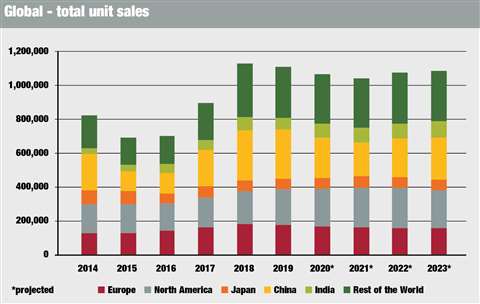 Global construction equipment sales hit an all-time high of 1.1 million units in 2018, with a retail value of approximately US$110 billion, according to data supplied by Off-Highway Research.

This eclipsed the most recent highs of 2011 – the peak of the Chinese stimulus spending boom – and 2007.

Continuing the trend seen in 2017, there was a widespread improvement in equipment sales around the world last year, with increases in North America, Europe and Asia.

In China sales of construction equipment, including mobile cranes, grew 37% in 2018. This followed on from the 81% surge seen in 2017 and took the market to 343,817 units. This was the highest Chinese equipment demand has been since 2012 and established the country once again as the largest market in the world.

India also had a remarkable year. Sales of construction equipment, including mobile cranes, grew 35%, the third successive year of robust growth. This took the market to a record high of 98,204 units – some 44% above the previous high seen in 2011, and more than double the demand seen just three years previously during the cyclical low point of 2014 and 2015.

Meanwhile, sales in Western Europe hit their highest for a decade in 2018, with a 10% rise to 177,694 units. Demand increased in 14 out of the region’s 15 largest markets, with sales in Germany and the UK in particularly good. The only time the German market has been as strong was at the height of the post-reunification building boom in the early 1990s.

The only disappointment among the world’s largest markets last year was Japan, where sales fell 5% to 63,700 machines.

While 2018 is likely to represent the peak in the current cycle, Off-Highway Research forecasts only a moderate decline in global demand this year. Sales are expected to remain above 1 million units, which would be only the fourth year in history this has been achieved.

The outlook for the following years is for demand to stay at good levels. However, this bright outlook could be threatened by unexpected political and economic events.

Key findings from the new data and forecast will be discussed at Off-Highway Research’s breakfast briefing on Tuesday 9th April, during the Bauma exhibition. Click here for more details and to book your place.