Europlatform sets the standard in Copenhagen 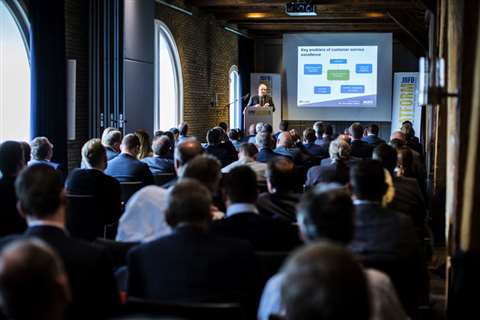 The ninth Europlatform conference took place in Copenhagen, Denmark, last week (7 October), with an enlightening set of presentations designed to help those in the access industry improve their businesses.

Andy Studdert, president of IPAF and CEO of USA-based NES Rentals, introduced the one-day event, organised by IPAF and its official media partner Access International, at the Copenhagen Admiral Hotel. The theme of the conference was Access rentals: securing the future.

Xavier du Boÿs, CEO of Kiloutou, provided the morning keynote speech in which he explored the subject of ‘how we create value in the AWP rental business?’. Effective customer service is key to the modern environment, he said, “without it we are dead”. He also went through a number of financial models that influence business development, including debt margins and the need to concentrate on rate of return, as well as adding value to your company through effective initiatives like customer service and increasing the working life of fleets through continued maintenance.

Nick Selley, group business development director, at UK-based AFI broadened the debate about customer service. He noted that 78% of the UK’s GDP now comes from the service sector and customers have much greater demands in this area, which has also been enhanced by new technologies and a number of socio-economic factors. Customer satisfaction brings about loyalty in customers who are generally less trusting than in the past, said Mr Selley. It is also 95% likely that 'very satisifed' customers will recommend your business to another potential customer. Effective customer service initiatives also leads to business efficiency and higher profits.

Petri Paavolainen, managing director of Finnish manufacturer Dinolift, delved into the digital age and explored how it is affecting our world and the access industry specifically. He said physical devices are increasingly being combined with digital technology. He used the example of how garbage trucks are being fitted with sensors to show their fill level, ultimately helping to improve efficiency across a fleet. As far as access equipment is concerned telematics and fleet management are benefits of the digital age, along with the monitoring of operators and vehicle control systems. Ultimately, beyond supplying information for analysis, intelligent AWPs will automatically be able adapt to working conditions through adjustments to physicals elements in the machine like breaks and hydraulics, as well as limiting working parameters, such as outreach in bad weather conditions. He also used the example of its new Dino 220XSE boom, which can have its 350kg capacity basket detached to create a telehandler, to demonstrate forward thinking in the access industry.

Rupert Douglas-Jones, head of research and development at IPAF, explained how 35.5% of all AWP accidents derived from deliveries while loading and unloading. IPAF is working with its UK County Council to provide a Loading and Unloading Best Practice Guide which will spell out the responsibilities of all those concerned including the driver and the user, along with information about what to do if you cannot deliver the machine to site and have to unload it on a public road. The working group is currently making its comments on the proposed document. Once that phase has been completed on 9 October, the document will be open for comments from the rest of the industry and IPAF urges anyone involved to have their say.

Dino Leistenschneider, executive vice president - sourcing and fleet management at Ramirent, explored total cost of ownership (TCO) and how to unlock its potential. He covered many areas ranging from the importance of understanding what drives the number of units a company chooses to invest in and how to take control of capital expenditure. Taking the TCO concept a stage further it is possible to address the supply chain two steps further down the line, i.e. of your customers’ customers to reduce inefficiencies. Working with other parties is also crucial, for example Ramirent took part in the European Rental Association’s (ERA) three-year initiative to reduce TCO and increase safety. The results were introduced this year and includes simplified user manuals and tie down instructions, for example.

Karel Huijser, general manager and vice president EAME, JLG, provided the afternoon keynote speech at which he explained how manufacturers must collaborate with a range of suppliers who might also be competitors. “You have to collaborate, you cannot do it alone – it’s too expensive.”

He gave an example of how JLG sells tracked platforms manufactured by Hinowa under the JLG brand in North America but is in direct competition with the same company for market share in Italy.

He also talked about JLG’s recent purchase of low level access specialist Power Towers and explained that a major manufacturer has to allow a much smaller yet highly innovative partner to continue its developments without unnecessary and overpowering control from above.

Søren Olesen, managing director of Denmark-based Danilift provided an insight into the Nordic truck mount market and how it has developed over the years with increasing working heights and applications.

Euan Youdale, editor of Access International, summarised some of the contents of the IPAF Rental Market Reports for Europe and North America, as well as information from the magazine’s annual Access50 listing of the world’s biggest access equipment rental companies by fleet size and the AccessM20 listing of the world’s biggest AWP manufacturers. For more information about these reports visit www.ipaf.org and www.khl.com

Denis Andreev, managing partner, Maxxim Aerial Platforms, and executive director, NAAST (Russian National Rental Association), rounded off the day with some interesting facts about his home country and its AWP market. He said there are around 8000 units in Russia, which is not enough to cover its needs. Mr Andreev explained the current deficit in the market was 2000-3000 machines. The market is dominated by rental companies; Pekkaniska with 2300 units in its fleet, and Fortrent with some 1000 units. After that the players are much smaller with mostly less than 100 machines.

Visit www.europlatform.info for more information about the conference and presentations from the speakers.