Dutch and Spanish construction on the up 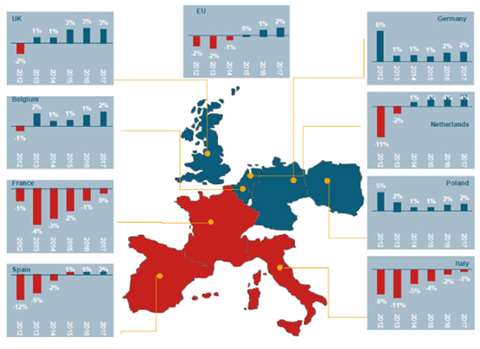 Encouraging signs seen in the Dutch and Spanish construction sectors in 2014 were also there in the first two quarters of 2015 ­– and they seem to be becoming even more positive, according to a survey of architects.

On the other hand, the French and Italian construction sectors are not recovering as fast as expected in earlier quarters, with many architects in these two countries still struggling in the first part of 2015.

The European Architectural Barometer report from Arch-Vision is a quarterly research project among 1,600 architects in eight European countries, designed to provide an indicator of construction activities.

In the report for the second quarter of 2015, it found that the British market kept on improving, back at the pace which had been expected in 2014. It said one of the reasons for this was that building permits for residential buildings had increased compared to the last quarter and the construction confidence indicator showed a slight increase.

Despite the optimism, Arch-Vision said there were warning signals for the future. Building permits for residential buildings showed a decline late 2014, and it said this would have an effect in two to three years. Arch-Vision nevertheless predicted growth of the market in 2015 of 3%, continuing in 2016 with another 3%, and 2017, also 3%.

From the third quarter of 2010, there has been a steady positive development among the German architects, it said. Both its Rolling Order Book Barometer and the Rolling Turnover Barometer grew substantially in the first quarter of 2015, with the highest growth figures since the second quarter of 2011.

However, growth in the second quarter was not as great as the first quarter. While only 7% of the architectural firms expected to see an empty order book in the next 12 months, Arch-Vision said there was some concern as all three confidence indicators had declined in the last quarter.

The French construction sector was said to be showing hardly any improvement, but sentiment was becoming less negative. There are still more French architects experiencing a decreasing order book in the past six months – 40% – than an increasing order book – 32%. However, the latter group was only 14% in the fourth quarter of 2014.

The drops in order book and turnover development in the second quarter of 2015 are not as big as the previous three quarters, and the fact that they are still negative shows that the French situation is not improving yet, said Arch-Vision.

The industrial and construction confidence indicators are at the same level as the first quarter, whereas the consumer confidence indicator has improved, although it is still negative. Therefore, Arch-Vision predicted that the French construction market would decrease in 2015 by 2%, and in 2016 by 1%. It said the market would not recover before 2017, when it will level out.

Arch-Vision said these figures had not been this positive since it started in 2009. The more positive attitude was also reflected in the development of building permits and the amount of architects with cancelled projects – 38% in the first quarter and 23% in the second.

It said permits for residential buildings showed a slight increase in the last quarter, but the permits for non-residential showed a big increase. The years after 2015 will show the road to recovery of the Spanish construction sector, predicted Arch-Vision, with a 2016 figure of +1%, and +2% in 2017.

In Italy, there was a slightly smaller decrease in both Barometers over the first quarter. There were more architects noticing an increase in their order book – 12% in the second quarter compared with 4% in the first. However, 50% noticed neither an increase nor a decrease.

Arch-Vision said that Italy had surpassed Spain’s low levels in the Rolling Order Book Barometer two years ago, and was therefore the worst performing country.

It said that improvement of the construction market in Italy seemed far away. While building permit data was slightly positive, they were still much lower than in previous years. Again the two- to three-year delay before this has an effect means that the outlook for the next 12 months is still not promising. Arch-Vision predicts a shrinkage of the market by 4% in 2015, by 2% in 2016 and 1% in 2017.

It said that for the whole of 2014, the Dutch order book and turnover development had been positive, and were even more positive in the first six months of 2015. At the pace they were going, the Barometers could reach the level of the third quarter of 2009 at the end of this year, said Arch-Vision.

The number of Dutch architects experiencing improvements, at 58%, was also said to be the highest since Arch-Vision started the research.

In 2014 and the first half of 2015, order books of Belgian architects were stable. Only 9% of Belgian architects expected an empty order book, which is one of the lowest percentages of the past year and a half. Building permit figures, however, showed a big drop for both residential and non-residential in 2014, and a slight recovery in the first six months. Arch-Vision predicted steady and modest growth for Belgium in future years, of 1% this year, 1% in 2016, and 2% in 2017.

After negative order book developments in 2013, the Polish quarter-to-quarter Order Book Barometer was positive again for the first three quarters of 2014. In the fourth quarter of 2014, Arch-Vision saw this indicator temporarily drop. However, in the first and second quarters of 2015, this indicator was again at a level of earlier quarters, meaning that the number of architects that experienced their order book growing was bigger than the number who saw them declining.