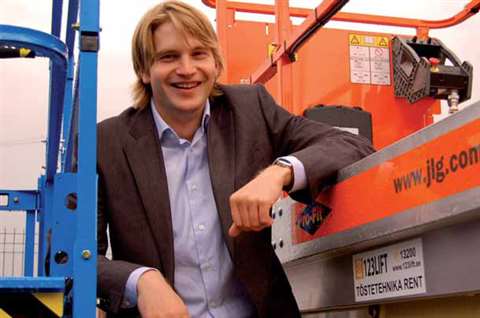 Aivar Brock with some of the new JLG and Genie lifts in the fleet of 123lift in Estonia.

The old hands of the rental industry in Scandinavia will not have everything their own way in the emerging markets of the Baltic States and its surrounds. That, at least, is the hope of an emerging new generation of home-grown rental entrepreneurs typified by two young Estonian men-Aivar Brock and Kaspar Jänes-who since leaving university seven years ago have established several new rental businesses.

Aivar Brock, speaking to IRN by telephone from the Tallin head office of Unitree Group-the holding company for two men's businesses-says that their first concern, Dive, was actually nothing to do with rental; it is a ‘mystery shopper’ company that carries out anonymous customer visits for clients to test their service levels.

Then two years ago it made its first foray into rental, agreeing to a joint venture with ADCO of Germany to take on the Toi Toi portable toilet and office rental operation in Estonia.

That business is ticking along nicely, but it is the latest venture, 123lift, a powered access and telehandler rental company started this summer, that has the potential to be the group's biggest.

“We were searching for successful specialised rental concepts in addition to our [Toi Toi] venture”, explains Mr Brock. “We were browsing through the reports from various companies and one day read about Cramo's acquisition of Hamar Liftutleie AS in January 2007. We investigated the powered access concept further and saw good potential in the Baltic market. All of that happened in the beginning of 2007.”

A lot has happened since then. Around 50 machines-mainly JLG and Genie models-are now based at the head office in Tallinn (shared with the Toi Toi business) and a second at Tartu is already planned for this Autumn. The choice of JLG and Genie is, says Mr Brock, because they want big-brand units that hold their values. A third supplier is the UK's Niftylift for trailer-mounted platforms.

He says more of the country's contractors are looking for aerial platforms; “The demand is growing as the labour cost is growing. After EU accession, the Baltic States have suffered some migration to other EU states and the labour cost has gone up significantly in recent years, especially in the construction sector.

“These factors have been accelerating the demand and implementation of efficient tools and equipment on worksites, aerial platforms being just one of them…”, according to Mr Brock. “We see that the construction market has made a slight shift from residential to industrial and infrastructure building. That has also caused demand for access platforms.”

Much of this growth has been helped by the activities of the major Nordic rental companies like Cramo, Ramirent and Pekkaniska, all of whom are present in the Baltic States, although Mr Brock doesn't mention them by name. “Equipment rental is becoming a commodity product [in the Baltic States], where you can already see Scandinavian rental companies advertising on the streets with large banner adverts”, he says.

Mr Brock says the plan is to grow the 123lift business rapidly, and not just in Estonia; “We are planning for at least over 50% growth per annum over the next five years, and that should already make the point that we don't limit ourselves only to the Estonian market.” He says the fleet will be over 200 units by the end of next year.

It would be nice to report that safety is one of the big drivers of powered access rental in the Baltic States, but that doesn't seem to be the case. Mr Brock tells IRN that its customers are primarily interested in the productivity benefits of access, and that efforts to promote aerials by using the safety argument have not so far been effective.

He says, however, “We are very aware of the safety culture in some other EU countries, and we know what IPAF [the International Powered Access Federation] is doing [with training], so we hope that we can also be pioneers in that in the Baltics.”

He says they knew from the beginning that 123lift would be active in all three Baltic States, although he will not give details about when the company will establish operations in Latvia and Lithuania.

The two men, who have been friends since childhood, have even wider ambitions; “Through our other businesses we have good connections in Belarus, Ukraine and other Eastern-European countries, so I believe that we will announce more news after opening up the second Baltic country”.

The initial aim, though, is to become a regional Baltic States access rental company. In addition, Mr Brock says the two are looking for other rental opportunities; “We have a couple of ideas-probably niche oriented. We already have very strong plant hire players in the Baltic States.”

He won't say what these ideas are, but one could speculate that they might be looking at things like pumps or temperature control rental. “We are constantly looking for scalable, growth-oriented rental concepts”, he says, “So we are open for suggestions and are ourselves searching around.”

So far, the access business has started well. Utilisation is ahead of plan after just a month of operations, even if pricing has been pretty competitive, says Mr Brock.

It is also inevitable that there will be other new entrants to the market in the future. Mr Brock comforts himself with the fact that the Baltic region isn't the easiest market to enter; “The Baltics (Estonia, Latvia, Lithuania) is even less in total population than Sweden, and we are talking about three different countries with three completely different languages. That doesn't make the life easy for someone who is thinking of expanding to all three markets with very limited access to finance.” Be warned.