How do you rate? 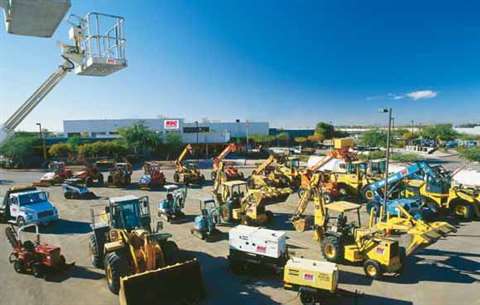 An RSC Equipment Rental branch in the US.

Where do you start when it comes to the financial performance of a rental company? Well, profitability is as good a place as any, and on this measure at least, the world's rental companies seem to be pretty well in the black: almost all of the top 100 companies made a profit with an average of over 6.5% of revenues (see Table 1). The major exception, Ashtead Group, explained away its 2006 loss on the integration costs of the NationsRent acquisition.

Of course there are many other financial ratios and statistics that can help the industry understand how it is performing. These indexes help you see how your company (or supplier, customer, competitor) measures up financially. They also answer some basic questions, such as, how profitable is a typical rental company?

The benchmarks can help you in your dealing with investors, banks and potential acquirers. If the bank says, “we can't lend more money for you to buy fleet, you already have an unacceptable level of debt”, it helps to be able to point to data that show how you really compare against the rest of the industry.

Rental company managers may also use the data to help evaluate potential acquisitions, or where to open the next branch. Or perhaps the acquisitive Americans, or western Europeans like Loxam and GAM, will look towards the returns Ramirent is achieving in Scandinavia and Eastern Europe?

How much profit should a rental company make, as a % of sales? No two equipment rental companies are exactly alike, so compare companies with caution (more below).

As a rule of thumb, most rental companies start to feel comfortable with after tax profits (Return On Sales or ROS) of anything over 5%. There is a myriad of factors that affect this, including ‘internal’ issues such as depreciation and interest policies (more later), fleet age and maintenance expense (or maintenance backlog!) and others. External factors affecting returns include competition and rental rates, tax rates, overheads and other costs of doing business, etc.

For the IRN-100 companies the average Return On Sales (ROS) was 6.52% for the year ending December 2006 (see Table One). Ashtead Group made a loss of just over 4%, due to exceptional costs of integrating their NationsRent acquisition. Others ranged from Nikken of Japan at just over 2% to Ramirent of Finland at just under a robust 16%.

Some industries, and rental market segments, have very different profitabilities. A 2.5 t forklift may go out on rent long-term to a warehouse application for less than 1.5% of its acquisition cost per month, while hand tools may rent for 20% of their capital value per week. Several of the companies compared in this article rent everything from small tools to temporary offices to cranes; nearly all sell some new and used equipment and training services.

Different industries have different profitabilities. Microsoft makes a dizzying 34% ROS, after tax, and has an equally spectacular US$28 billion in cash and equivalents. At the other extreme, it is said that the airline industry, as a whole, has never actually broken even in its history (without subsidies from governments).

It's no secret that building a rental fleet takes a great deal of cash. Some of this is capital or equity, the highest risk money that demands the highest return. More of the investment is debt, which is often equipment leases, or other loans secured on hire fleets. In most countries it's quite cheap, compared to capital investment, and over the last few years of economic boom (with the notable exception of Japan) has become surprisingly readily available and used by rental companies.

Why is there more debt in some rental companies?

Usually, the equity investors want it that way. The equity investors want to grow, and increase their return, and it's cheaper to do it with the bank's money-if you can get it. Debt providers nearly always require less return on their investment than equity investors. A typical Western European or American debt provider requires significantly less than 10% return per year, while a venture capitalist often aims higher than 30%. Publicly traded shareholders are usually happy if their return is over 15%, including both the appreciation in share price and the dividends paid.

What is the bank looking for?

Usually the bank seeks a relatively low return for relatively low risk. Typical bank funding rates for medium-to-large rental companies are 0.7% to 2.5% over the bank's own cost of funds. For reference, today's 12-month Euribor is around 3.5%, so with say another 1.5% margin for the bank, a typical Euro-zone rental company should be able to borrow money at around 5%. That is much cheaper than getting additional equity at 15 to 30%.

How much debt will the bank let you have?

This depends on the bank, and how they see the owners, markets, equipment and suppliers. A conservative lender, perhaps with limited rental company experience, may get nervous if a customer has a debt to equity ratio of over 1:1. Perhaps that lender is happy with a return of less than 1% over its cost of funds. Again, this is balanced by low risk.

A bolder lender, who believes that the world does not end if they have to repossess and sell used equipment rental fleet, may be more interested in lending to a fast-growing, more highly leveraged rental company, for a return of 5% over cost of funds or more. Perhaps the bolder lender isn't scared of rental companies with debt to equity ratios of 5:1, but rather is more interested in looking at the credit quality of the rental company's own top customers, specification and brand of equipment, and the abilities/financial strength of the company's owners and managers.

Perhaps having average rental company financial data will make banks more comfortable with the rental industry, which has an overall higher average debt to equity ratio than many other industries.

Does a company want to take the cost of equipment to zero over five years, then sell it for a profit (above its depreciated value), like some German and Scandinavian rental companies do? Or is it better to recognise that cranes, large generators and boom lifts hold their value extremely well, depreciating them over ten or fifteen years, and then selling them at their written down value? Hire fleet depreciation can be one of the biggest costs to a rental company, which means that the difference between five to ten year depreciation can literally wipe out the year's profits, depending on how and when the company disposes of used equipment.

To take a bizarre example, if United Rentals in 2006 changed its depreciation expense from 9.4% to 15.7% of asset value, like Ramirent, and sold no used ex rental equipment, then it would have made no profit for the year. However, it's overly simplistic to compare Ramirent to United; their equipment mix and customer bases are not the same, not to mention that they are on different continents.

One of the best financial comparison tools for rental companies is to look beyond debt to equity ratios or whether or not a company's equipment is paid for, and look at EBITDA. EBITDA is Earnings Before Interest Tax Depreciation and Amortization. Or, more simply, it's how much cash the company generates, out of which it has to pay for the equipment and its finance, before paying taxes and making a return for the investors.

The average for the IRN-100 companies is almost 35%. Some rental companies have EBITDA of over 40% of sales, but beware of the grey area between rental fleet that is sourced by lease, operating lease, or rental from other companies, particularly where the rental has non-cancellable terms.

This is interesting to compare on an informational basis, rather than a hard-and-fast benchmark. Obviously it takes more personnel to rent hand tools for weekend do-it-yourself work than for access equipment going on a two-year construction project, but this is often balanced by rental rates and equipment life.

What to measure – comparing apples with apples

It is a challenge to find two rental companies that have more in common than they have differences, to be able to make a precise comparison of their financials. Almost all rental companies don't only rent, but they also sell equipment, usually new and used equipment that form part of their rental fleet. Most of the top ten, with the notable exception of Aggreko in generators and compressors, have multiple lines of rental equipment, ranging from hand tools, drills and shovels to mobile cranes capable of lifting over 1000 t.

Some rental companies are divisions of larger organizations, which makes comparison difficult. A perfect example of this complication is RSC Equipment Rental, which has just separated itself from its former parent Atlas Copco, the Swedish multinational, via a New York Stock Exchange flotation. Its balance sheet had over US$2 billion don't of debt, with relatively low equity, as its parent was quite well capitalised. However, this means that until a few weeks ago, the fourth-largest equipment rental company in the world had nearly no capital of its own, which of course had a large mathematical impact on the “average” industry debt level.

For averages and other ratios, it is also worth keeping in mind that we are comparing companies who rent hand tools, earthmoving equipment and generators with access equipment companies, as well as equipment dealers who also rent. A good example of this is H&E Equipment in the US, who derived just under a third of revenue from rental.

Some private companies, like Loxam, are owned by private equity funds and choose to keep their financial information confidential. Where possible, we have obtained information from publicly available sources, from the companies themselves, from official registries, estimates, and from the reliable source of the industry rumour mill.

Of the top ten, United and Loxam are owned by private equity funds to complete in the next few weeks). They are about 31% of the top 10 by revenue. The others are publicly traded in various markets, from New York to London and even Helsinki in the case of Ramirent, or are divisions of larger, publicly traded multinationals. The balance are private companies; however, there is a fine line between a company owned by a private equity fund and a professionally managed company owned by high net worth individuals.

Interestingly, there is no momentous average difference in profitability and other ratios between private and publicly traded companies, until very far down the list, where the data begins to get less reliable in any case.

While this analysis of the IRN-100 rental companies must be taken in context, and with a grain of salt, it provides useful benchmarking tools. Even comparing companies who sell and rent different types of equipment, who are large and small and in different geographies, can show more similarities than differences.