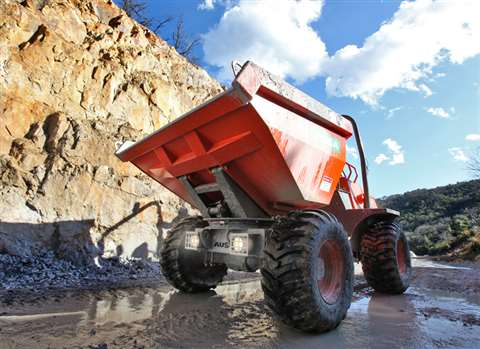 Manufacturer Ausa said it planned to have a wide range of its dumpers, forklifts, telehandlers, multitask and street sweeper vehicles on show at Bauma Munich.

It said five dumpers would be presented, including its largest articulated chassis model – the 10 tonne capacity D1000 APG model.

Other dumpers on display will be the D120AHG, the D350AHG, and the D600APG, with 1.2 tonne, 3.5 tonne and 6 tonne load capacities respectively. The D600APG is an EU Stage IIIB-certified model that also comes with the seat sensor and an optional full visibility system through front and rear cameras.

There will be three Ausa forklifts models on show as well - the 1.5 tonne load capacity C150Hx4, the 2.5 tonne capacity C250Hx4 and the 5 tonne capacity C500Hx4, which is also equipped with an EU Stage IIIB engine.

Ausa said its rough terrain and semi-industrial forklifts were characterised by an innovative design with tilting cabin, providing high accessibility for maintenance tasks.

On the telescopic handler side, Ausa said its Taurulift T144 H and the T235 H models would be on show, with the former able to load 1.35 tonnes to a maximum height of 3.9m, and the latter able to load 2.3 tonnes.

And an Ausa Urnan vacuum street sweeper will also be on show – the B200H, with 2m3 capacity and equipped with the Euro VI engine - together with the company’s M350H multitask vehicle.

This is a compact rough terrain tool carrier vehicle with a 3.5 tonne load capacity that can be equipped with a diversity of accessories, such as salt spreader or a snowblade, thanks to the iLinkSystem and its quickness in attachment coupling.