What was the rental sector’s biggest news from 2021?

With Covid-19 continuing to cast its shadow across the world, it has been another challenging year for the rental sector, as well as the wider construction market.

However, there has still been plenty of activity as stakeholders continue to adjust to a new normal and carry out business as usual.

1 - IRN100: the largest equipment rental companies in the world

Despite the ongoing challenges of the Covid-19 pandemic, there was still room for growth in the 2021 list, especially in China, with Horizon, Pangyuan and new entrant Zhejiang Huatie all in the top 60.

In Europe, Sunbelt Rentals UK, Zeppelin Rentals and Renta Group were among the few reporting higher revenues in 2020.

Private equity firm TDR Capital confirmed that it expected the acquisition of Aggreko to be completed on 10 August, with the power company’s share listing cancelled on 11 August.

Aggreko’s sale to private equity firm TDR Capital was one of the major stories from this year.

Oshkosh Corp, owner of JLG, said “significant” supply chain and logistics disruptions as well as rising costs were hindering the production and delivery of machines and that revenues and profits for the fourth quarter of fiscal 2021 would be lower than previously forecast.

The company, which said the problems were impacting its access business in particular, reported strong growth in demand but said the unavailability of parts was holding up production and leading to inefficiencies in labour.

Released in October of this year, the new EHR Battery Power Generator is designed to be used in conjunction with standard diesel or gas-powered generators, as well linked to mains power grids and solar panels.

In September, SmartEquip launched its parts e-procurement network in Japan through a partnership with Tokyo-based Diamond Construction Equipment Corp.

Diamond is co-owned by the four largest Japanese equipment rental companies and Mitsubishi Corp. It provides long term re-rentals of excavators in Japan and other services, including transport logistics, and now also SmartEquip technology. The four rental companies are Nikken, Aktio, Nishio Rent All and Kanamoto, which together account for more than 35% of the Japanese market.

In the first of a new ‘Test drive’ series for KHL, construction equipment journalist Dan Gilkes put the JCB 525-60E electric telehandler under the microscope.

Rental companies from the UK and Russia picked up the rental company accolades at the 2021 European Rental Awards dinner in Amsterdam on 29 September, while manufacturers JCB and Genie were also honoured. 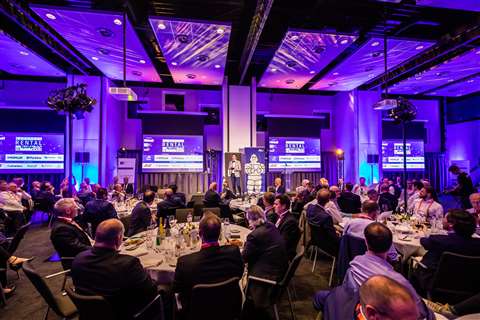 The 2021 European Rental Awards were held in Amsterdam.

Described as an “important strategic step in the transformation of Yanmar”, the SV17e will be aimed at European customers and is powered by an electric drive and 48-volt batteries with fast charging capability.

Japanese manufacturer Hitachi Construction Machinery will pursue growth in the Americas rental market under its own brand following the ending of its joint venture with US-based John Deere in the region.

Hitachi said it will continue to expand the Arizona-based ACME wholesale rental business in which it first invested in 2018 and after February 2022 - when the JV with Deere ends - it will add dealer-rental operations under the ‘Premium Rental’ brand that its dealers also use in Europe.