Japan-based pump manufacturer Tsurumi has expanded its HS series with a new dewatering pump: the HS3.75SL, which is available globally. 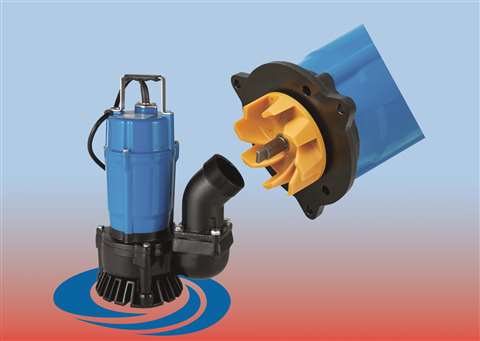 Tsurumi’s new HS3.75SL has an impeller made of polyurethane

It was said to have the capacity to move a lot of water despite having a comparatively small motor. With a motor output of 750W, 580 litres can be moved per minute, and the pump has a maximum head of almost 11m.

Given its modular design, Tsurumi said the new model is easy to maintain because many parts can be replaced with standard tools.

It is also safe to run dry, so the HS3.75SL can run for a long time, unattended, without moving water.

This is because the water is not guided through the pump casing but via the spiral-shaped housing base with an 80mm side outlet. So even sand and gritty lumps can be passed through without sanding the inner components.

Resistance is enhanced by a double internal mechanical seal made of silicon carbide. And in addition, the motor shaft is protected from the abrasive water flow by a protective sleeve with a sealing ring and several sealing lips.

If particularly thick fluid is to be pumped, the agitator at the suction opening makes the medium flow. A special feature here is the impeller made of polyurethane, which was said to be particularly durable.

The pump weighs less than 20kg and is 45cm tall. It comes with a large handle and a 10m long rubber power cable for 230V.

A version with an on-off float switch is also available.