BHS, which years ago became the manufacturer’s first ever export customer, is based in Rige to the south-east of Esbjerg in the southwest of Denmark and is an authorised Tobroco-Giant distributor for both the Danish and Swedish markets.

It recently took delivery of the 2.6-tonne electric G2700E X-tra for use in its own in-house equipment fleet.

The Stage V compliant articulated machine, which was recently showcased at Bauma, features a 26.6kW 48V lithium-ion battery and offers a maximum lifting height of 2.5m, a lifting capacity of 2.3 tonnes, and a tipping load of 2.9 tonnes.

When BHS, which has a relationship with Tobroco-Giant that extends back over 20 years, decided to add a new compact loader to its fleet, the equipment manufacturer offered it the 1,000th unit in recognition of their the longstanding partnership.

Describing BHS as loyal customer, Tobroco-Giant said, “This collaboration has resulted in more than 5,000 wheel loaders sold in this region.

“Because of the special bond between the two companies, the 1000th machine was offered by [Tobroco-Giant] director and owner Toine Brock and his wife Caroline Brock”, to BHS. 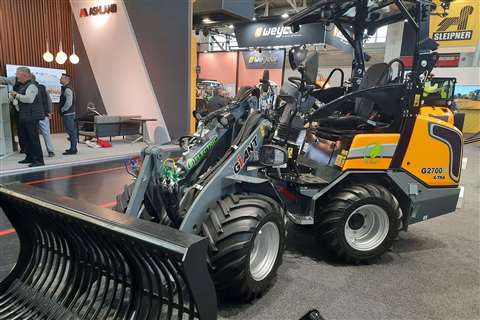