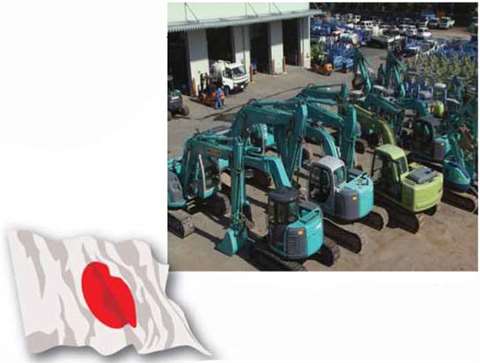 Excavators and small aerial platforms at one of Nikken's Tokyo depots. The company is investing heavily in aerials this year.

One of the many fascinating aspects of the Japanese equipment rental market is watching how the big players wrestle with the challenges of operating in an already highly developed, competitive sector. In that respect, it offers rental companies in countries like France, the UK and the US a kind of alternative ‘how-to’ guide to rental.

The challenges faced by Japan's ‘big four’ renters-Aktio, Kanamoto, Nikken and Nishio Rent-All-would, indeed, be recognized by any rental company anywhere in the world. According to Kanamoto, for example, total rental revenues in Japan have actually been falling in the past four or five years, from a high of over Y1000 billion (€6,7 billion) at the start of the decade to under Y900 billion (€5,5 billion) now. This despite a largely stable environment for construction investment.

Yuichi Takayama, manager of Kanamoto's investor and public relations office, tells IRN that one of the reasons for the fall is pressure on rental pricing, particularly in certain popular machines (he gives 20 t excavators as one example). A fall in public expenditure on infrastructure is another key reason for the decline.

That said, general market conditions are held to be reasonable at the moment. A spokesman for Nishio Rent-All, which is Japan's number two rental player behind Aktio, tells IRN the current market is “in good condition now. Especially for equipment used for private sector construction such as aerial work platforms, scaffolds and small power tools, where demand is stable.”

Meanwhile, Nikken's director of corporate planning, Mr Masayoshi Seki, tells IRN that although the rental N market is “rather flat” is not standing still; “instead, it is in the process of transformation from public to private sector and from the survival of also-rans to a limited number of players.” Private sector work is busiest in the major urban centers, says Mr Seki, and is driving a demand for small, electric aerial platforms in particular. So much so, in fact, that half of Nikken's investment in new equipment this year will be in aerials.

And even if rental rates are under pressure in places, several big rental players still feel there is scope for the market to expand. Kanamoto reports that Japan's ‘rental reliance’ rate-that is the proportion of all equipment on sites that is rented, in unit terms – has been creeping up for several years and is now just over the 50% mark. (It is important to note that this rate specifically excludes five types of equipment that have very high rental penetrations, including aerial platforms, fans and generators.)

One interesting aspect of this reliance statistic is how it varies between general contractors and subcontractors. The former have rental reliance rates approaching 70%, while the sub-contractors are nearer to 41%.

Kanamoto's Mr Takayama says around 1,7% of all construction spending in Japan goes to rental companies. This is a fairly stable number, he says, although is also creeping up: he thinks it unlikely to exceed 2%.

At Nishio, there is agreement that the trend to rent continues to be positive. It observes that, while the rental market is influenced by changes in construction investment, “the degree of construction companies’ dependence on rental is gradually companies’ dependence on rental is gradually increasing. Also, the trend to change from owning to renting equipment will be accelerated under the strengthening engine emission regulations.”

Nishio says that owners are being forced to buy new equipment to meet the new laws; “Thus, we foresee that there will still be room for the rental business to expand.” Kanamoto makes the same point about emissions regulations, saying that it is able to counteract price issues to some degree by investing in the latest, in-demand low-emission models.

Japan's rental market shares with its western cousins a trend towards consolidation. Kanamoto estimates that the big “broad market area players”-the four big names-represent about 32% of the market, while official Japanese statistics reveal that the top 50 players represent something like 70% of the total. That leaves around 2000 small- and medium-sized, often family-owned companies that-like their counterparts in North America and Europe-are busy being acquired by the major players.

Figures show that the market share of the bigger players has been growing steadily as they acquire companies. Japan's Komatsu is also playing a part in this process-the manufacturer started renting in Japan several years ago and now operates a number of rental firms that it has acquired and which now have total revenues of around €180 million (see IRN-100 this issue). (This does not stop Kanamoto from buying Komatsu equipment.)

Kanamoto is one of Japan's big four rental companies, with an annual turnover of Y68 billion (€415 million).

Kanamoto plans to continue to make acquisitions, and Mr Takayama says that companies with annual revenues of Y3-5 billion (€18-30 million) will be ideal targets.

Aktio, Japan's number one, is another that is buying these smaller firms. A spokesman says that while Aktio's underlying growth has been modest or stable, it has been posting 20-30% revenue increases because of acquisitions. The spokesman says Aktio's strategy is to continue to grow by this means.

If Aktio sees acquisitions as the key to growth, both Nishio and Kanamoto have other approaches. Nishio says it will expand its market share by “providing value added proposals-in terms of safety and construction techniques” for particular jobsite applications. If that description is careful not to reveal too much, the company adds that it also sees opportunities to strengthen its activities “in the sectors of industry or work operations where rental use has been small in the past, and capture new markets and customers. Especially, we expect rental demand in the mechanisation of various maintenance tasks inside factories and other facilities.” This latter trend will see Nishio invest in more industrial-type aerial platforms, both Japanese and western-built.

Nishio also has some specific plans for its fleet this year, including an expansion of its range of surveying and measuring equipment, such as GPS controlled bulldozers and the use of cameras and video transfer devices for unmanned machine operation.

Kanamoto, on the other hand, is combining product diversification with depot openings to grow its business. New products being added to the fleet include 100 underbridge inspection platforms from Furukawa Unic; specialist asbestos monitoring equipment; and ground improvement equipment.

Some of the 10300 aerial platforms in Nishio Rent-All's fleet. The company says it will in invest further in articulated booms for industrial maintenance work.

Kanamoto's Mr Takayama makes the broader point that Japan's post-WW II infrastructure is ageing and needing replaced or refurbished, and this is an area that he thinks will see a lot of investment in the coming years. It also helps explain the big investment in the underbridge inspection units.

In addition, Kanamoto will shift the focus of new depot openings to new areas in western Japan, as well as establishing additional locations in high-growth metropolitan areas such as Tokyo, Nagoya and Osaka.

Nikken is taking a different approach to the other players. Rather than acquire companies that have similar equipment, it is looking to expand into the industrial maintenance sector by buying small, specialist industrial rental firms. Many of these will be in the big cities. However, although like the other big players it is opening more depots in the cities and closing some in rural areas, it is still looking for work in the rural areas through alliances with local rental companies. So far it has around 50 of these. The company's Masayoshi Seki tells IRN that it is still too early to give details on how these informal alliances are performing.

A final strategy for all of the big players is involvement in markets outside Japan. This takes various forms, with Nishio Rent-All having established rental subsidiaries in Malaysia, Thailand and Singapore; Aktio in Thailand and Singapore; and Nikken with its US subsidiary (see box story). These foreign outposts are helpful in selling on used equipment from their fleets.

Kanamoto's rental division has 145 branches and more are planneed in the west of the country. The company has also just established a rental joint venture in Shanghai, China.

China is also starting to interest the Japanese renters. Kanamoto has just established a joint venture in Shanghai, China, that will start to rent equipment soon, perhaps as early as June. It will begin with small items such as generators and pumps.

Mr Takayama says that many of the big public contractors in the Shanghai area will soon evolve into private-type operations, and they will want to rent equipment. He says Kanamoto believes its Shanghai operation is a real opportunity to build a market in China.

Aktio, meanwhile, has been operating in Shanghai for around three years, renting mainly industrial forklifts and generators to Japanese companies in the region. The Aktio spokesman says it is still at a very early stage of development and progress is modest.

Nikken, meanwhile, is less interested in China than Aktio and Kanamoto. Nikken's Mr Seki tells IRN that it is watching China with interest, but believes that equipment is currently used too intensively for rental to be of great value, and adds that this intensive workload means that machines have very little residual value after two or three years.

Nikken is, however, interested in a global presence, and is thinking, for example, of using its Americ business in the US to help it establish a re-rental operation in the US, focusing on products like aerial platforms. It does not have a timescale for this.

These activities in China, Asian and elsewhere are interesting, of course, but it is how Japan's rental companies develop in their home market that is most important, and will ultimately determine their success or failure.