Italy-based Tampieri Group has renewed its four-year rental agreement with Italian Hitachi dealer SCAI for the third consecutive time. The two parties have been working together since 2011. 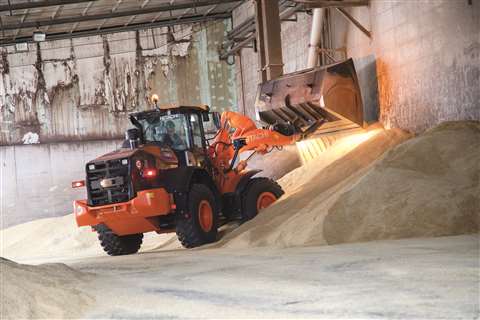 Franco Tampieri, Purchasing Manager at Tampieri and one of the company owners, said, “We decided to continue renting Hitachi wheel loaders from SCAI in 2015 and 2019 because we have been happy not only with the machines, but also the technical and administrative support.”

He highlighted the importance not only of price but also the level of cooperation offered when choosing a rental company.

Tampieri’s Purchase Department Coordinator Pietro Tampieri added to this, saying, “If you buy machines, it’s not just the capital cost you have to consider, but also the running costs.

“As the wheel loaders operate 24/7, our rental agreement with SCAI is successful because the technical support is fast and keeps them up and running at all times. The ZW180-6s are critical to our operation and that’s why we need reliable machines.”

Each machine moves up to 1,000 tonnes of material per day and the operators work across three shifts.

Tampieri’s busiest period is from August to March, coinciding with the harvesting season each year. At this time, around 200 trucks visit the plant per day.

Christian Cimino, Tampieri’s Manager of Machinery, said, “We have seen the development of the different ZW180s, so that the latest ZW180-6 is easier to use, more intuitive and has more technology.

“The visibility from the cab has also improved and there is a fuel saving of around 20% over the previous model.”