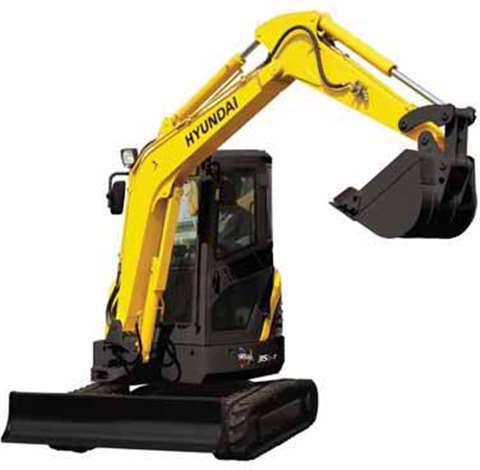 So versatile it can take on almost any type of construction work, from using a hammer to break up concrete to digging holes for landscaping, the mini excavator offers power and manoeuvrability with durability and an appetite for hard work.

For those machines of 3 t and under, the market is buoyant and this shows no signs of changing in the near future.”For the last five years, the [European] market has been very strong and we have experienced double-digit growth year on year,” says Kevin Zimmer, business manager, Compact Excavators at Bobcat. “And this has continued, despite the size the market has achieved.”

Western Europe has accounted for the majority of sales for mini excavators, he says, for the last few years. Looking to the future, Eastern Europe, from the Baltic to the Balkans, is adopting the concept of the mini excavator very quickly.

“More than a third of our market in Europe for mini excavators is for 1 to 2 t machines, and this why we have put so much investment into this segment.”

An expandable undercarriage on both the 321 and 323 excavators allows the width between the tracks to move from 980 mm in the narrow travel position to 1360 mm, providing stability for digging and loading.

Mr Zimmer is quick to point out the advantages of these small machines-”they are compact, they fit through small openings, they can work inside buildings, on a tight radius, cause minimum damage. They are also simple machines to use, even by a novice operator, which is very appealing for the rental business as this does not require large amounts of training. They are also extremely transportable - these machines are of a weight that can be transported on a trailer, a small utility vehicle or even in an estate car.”

He says the future is likely to bring increased versatility for machines in the mini excavator sector, with further development of attachments allowing machines to take on more capability.

In terms of the market for the 3 t and under machines, Western Europe is still the strongest. He predicts this will continue, both in terms of new customers, and for replacement of existing machines.

He also expects growth to continue further east. “In Russia for instance, the market is still in its infancy in terms of compact excavators, but growing at a fast rate and we as a company are having some success with developing a dealer network.

“Certain markets lead in rental, obviously, with the UK the leader, followed by France, but other countries are growing independent plant hire companies and mini excavators are ideal for this. Rental is a very good way for a customer to have a new machine. It meets the needs of business without too much investment, as well as creating a body of second-hand machines for customers to chose from.”

Japan-based Takeuchi has also experienced year-on-year growth in its under 3 t mini excavator sector. The company, which also has offices in the US, UK, France and China, has 6 models in the under 3 t category,

“It is the success of the under 3 t models that has driven sales,” says Tony Tite, UK and Eire sales manager at Takeuchi. “They are the most popular of all the Takeuchi fleet.”

According to Mr Tite, the 2800 kg TB125 is its leading machine for sales worldwide. In the UK, for example, it is the company's number one seller, closely followed by the 1600 kg TB016. Together they account for 50% of Takeuchi's UK sales of mini excavators, of which 80% of business goes to tool and plant hire.

“Predominantly our machines are geared for the plant hire business, and are built for the demands of hire. They are seen to be tougher, manufactured of 100% steel, have a rugged construction and are easy to use. The key is reliability in fleet hire, this is the key to success and repeat business.

“Takeuchi has always focused its efforts on the 3 t market because of volume sales, and it has successfully become the choice for worldwide rental companies. Our machines have the same reputation as Japanese cars-they are reliable.”

In Italy, meanwhile, Alessandro Cesaretti, of Scai Rental Company, the official Italian Hitachi dealer based in Perugia, northern Italy, describes the rental market for the sub 3 t sector as “really growing”, but says rental customers are still largely motivated by price rather than quality and service provisions. “Customers are also looking for more and more attachments, but the competition is very tough. But I can see good rental potential in this market in the future.”

At this year's Bauma exhibition in Germany there was no shortage of 3 t and under models being launched into the sector. Hitachi expanded its lineup in the mini-excavator category with the launch of three new short-tail machines, the 1,1 t ZX10U-Z, the 1,7 t ZX17U-Z and the 2,3 t ZX22U-Z, along with the 1 t ZX08-2 micro excavator.

Changes to the counterweights have led to improved stability, according to the company, while the cabs have more legroom, better visibility and air conditioning. The series has also been fitted with powerful and durable engines to maximise productivity on site. The new engines have expanded exhaust capabilities to meet the most recent emissions regulations and noise suppression standards.

Joep van den Maagdenberg, area sales representative, international sales at Hitachi Construction Machinery (Europe), describes the mini sector as “one of the major parts of the market. For us in Europe, in Italy, Germany, the UK and France, the 1,5 t class is very popular, about 75% of the total market.

“We hear from our dealers that these machines are used like utility machines, as an additional tool, and they are becoming more and more popular.” He says rental customers in the different European regions are looking for different things from Hitachi's mini excavators.

“For example, in Germany renters want machines with full specifications, while the UK market are looking for a very basic model. The Italians want canopy machines because of the weather, and in the Benelux countries and Denmark cabin machines are very popular.”

He predicts the rental potential for the sub 3 t mini excavator to grow further. “I don't have a crystal ball, but I expect by 2010 that the total European rental business will be about 60/40 in terms of rental and end users.

“They are popular, because they are multi-functional, have a diversity of attachments, are easily transportable, simple to use and inexpensive.”

Hyundai's newly-launched R35Z-7 is the first zero tail-swing compact excavator developed and manufactured by the company. The compact design means the machine can work in spaces too narrow for normal construction machines, and it has a centre of gravity placed as low as possible to achieve good stability, as it has to function without a protruding counterweight. Weighing in at 3,65 t, it has engine power of 20,5 kW, a maximum bucket digging force of 35,8 kN, a digging depth of 3150 mm and a dumping height of 3460 mm, enabling high-sided trucks to be loaded.

New Holland used Bauma to showcase its E18SR, a 1,6 t machine with a short radius counterweight. Featuring an adjustable width undercarriage and folding dozer blade allowing it to fit through narrow openings, it also has a dual speed drive system to allow it to move quickly around sites. Described by the company as “a highly productive and efficient excavator” the zero tail-swing machine includes an Integrated Flow Pump System (IFPS), which provides smooth and responsive hydraulics that reduce cycle time and increase hourly digging capacity. The track width when travelling is less than 1 m, allowing it to pass through narrow openings.

When working, the track width is extended to 1320 mm, for improved stability. It can rotate fully within the width of its tracks, an advantage where space is tight, reducing risk of damage to the machine and giving additional safety for other site personnel in the area. It has a breakout force of 15,2 kN, a digging depth up to 2370 mm and a maximum dump height of 2750mm, enabling it to excavate and load quickly in restricted areas. It has a maximum bucket capacity of 441 l.

Amman Yanmar's Vi015 weighs in at 1,68 t with a canopy, and features an adjustable gauge undercarriage which can be widened from 0,95 to 1,28 m. Further up the range are the 4,64 t and 5,21 t replacement models of the Vi045 and Vi055, which feature a number of design improvements.

The 2,5 t TC25 is the latest mini excavator from Terex, featuring a new boom design and hydraulics, which the company says improves performance. In addition, the boom cylinder is top-mounted for greater protection. It also has a dump height of 2800 mm and 15,8 kN of breakout force. Power comes from a 16,5 kW Mitsubishi engine.