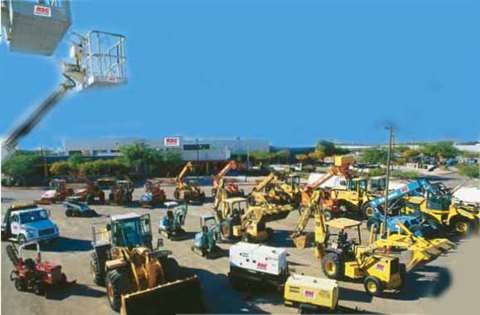 RSC's total fleet is valued at $2.7 billion and has an average age of 25 months.

It's now a year since RSC Equipment Rental was divested by Atlas Copco Group, and just five months since the company's chief executive officer, Erik Olsson, rang the opening bell at the New York Stock Exchange to mark the company's public flotation. In other words, the company has undergone some big changes.

“The big change has been the state of decision making”, says Mr Olsson, speaking to IRN at the company's head office in Scottsdale, Arizona, in September, “We're on our own now and can make acquisitions much faster. The other change has been a more defined growth strategy, which is also beneficial.”

So what is the growth strategy? As you would expect, there are several aspects to it. One is driving same-store growth. The company has added 88 new sales people to its organisation in the first nine months of the year, and 85% of these were in existing stores. As its most recent results show - for the third quarter of the year - this has helped increase revenues at its existing locations by 10,2%, higher than its overall 8% growth.

New depots will also play a part. Mr Olsson says the plan is to “open new branches where we don't have branches and where there's a good customer base”. In the third quarter, for example, it opening five new locations, bringing the total number to 469. “We're looking to do a total of 20 by the end of the year”, he says, “We haven't specified 2008 per se. We've said we'd like to continue to do it at this rate. There's a lot of opportunity out there.”

Acquisitions are, of course, also on the agenda, and although Mr Olsson foresees consolidation among the bigger companies as inevitable, it is smaller deals that are the current aim; “Right now, our acquisition focus is more on the smaller end of the market, a lot of tuck-in type of acquisitions – three branches, five branches, 10 branches, speaking to our network. That's really where we're focusing.”

Like others in the industry, however, he thinks the big players still have small market shares; “I think in the long term there will be more consolidation. I think the top three or four players have to have a much greater portion of the market than they have today. The top four have about 18 or 19% of the market. That should be 40 percent or 50%.”

Being one of the biggest rental companies in the world, it is inevitable that some in the industry will expect RSC to play a global role before too long. Is that something that interests Mr Olsson? “No, not at this point. You can never say never, as you never know what's going to happen down the road. At the moment we're concentrating on North America, as there's so much potential here.”

And that potential is currently not being adversely affected by the much talked-about residential slowdown. For what must the hundredth time, Mr Olsson explains the impact – or lack of impact – that this slowdown has had on RSC; “First and foremost, we have very few customers in that segment, 6% or so of revenues come from residential activities. Relatively little of the equipment we have in our fleet is used for residential construction. So we haven't seen any real effect on our numbers.”

So, for example, although the residential slowdown has led to as much as a 30% fall in telehandler sales in the US this year, Mr Olsson says that RSC's investment in handlers hasn't slowed down. He says the company has grown its high-reach revenues this year – comprising aerial platforms and telehanders – and expects to next year as well; “It's a big portion [aerials and telehandlers], so one could assume that there will be growth in those segments, as well.”

“We're 18 or 20 months into the slowdown on the residential side”, he continues, “and our numbers are stronger than ever ... I think we are in the middle of a normal, say eight year, non-residential cycle. We should see a couple more healthy growth years ahead of us. I think 2008 will be a growth year. Maybe not at the same rate as a 2007, which has been very strong so far ... I think the most recent forecast I have seen is 5 to 6%, and 5 to 6% I'll take any day.”

Its most recent financials, issued after this interview, continue to back this up.

RSC, like some other US rental companies, has been able in recent years to increase its rental prices because of the healthy level of demand. Is that continuing? “The rates are positive rate increases, but they have been growing at a decelerating rate recently, returning towards more balanced market pricing as we had in the late ‘90s”, says Mr Olsson.

A young fleet – average age is 25 months and with a current value of $2,7 billion – also gives the company the flexibility to cut back on fleet investment in the event of a wider slowdown, even though that is not what RSC is currently anticipating.

Mr Olsson puts the healthy performance down to getting the fundamentals right, including effective cost controls, efficient fleet management and customer service. “The quality of service that we provide in our view is the main reason we're growing much faster than the industry and our peers at the moment, or at least the last couple years.

“A couple of years ago, we very clearly identified key customer requirements along three areas: fleet availability, meaning we have the fleet when they need it. Fleet reliability, meaning that it shouldn't break down while on a job site. Service, show up on time, deliver on time, answer the problems 24/7 with in-house personnel. We've addressed every one of these with very targeted investments, very targeted innovations. We have a long list of projects to fully improve our services in this area. I think that's key”, he says.

Making as much of the fleet available for rent has been one particular project, and one initiated by a previous chief executive officer, Freek Nijdam, who was installed by Atlas Copco; “When Freek was here, we worked together on taking this non-available fleet to as low a level as possible. Equipment would come back, get serviced, and go back out and be ready for rental.”

One element of that has been sending out big repairs to its suppliers; “we have outsourced repairs for the more serious repair requirements, otherwise it clogs up our internal flow for days”, says Mr Olsson.

The continuous growth of the business has led to inevitable strains in the organisation, says Mr Olsson; “On an operational level, I would say people sourcing is the biggest problem. At the rate we're growing, 18% in 2005, 19% in 2006 and today 15% or so, requires a lot of people. And to find the right talent to help drive this profit, it's a big issue.

“What we're doing is everything we can, from finding and recruiting every which way we can, the internet, regular papers, universities, technical schools, and so forth.

It's a constant challenge to keep the flow going with talented people. Especially with the managers.”

At least it's a problem that is a by-product of success. Erik Olsson will no doubt be happy if that's still his biggest headache this time next year.