Chinese manaufacturer LiuGong is set to kick off its access equipment division with a 22m working height scissor lift at APEX Asia. 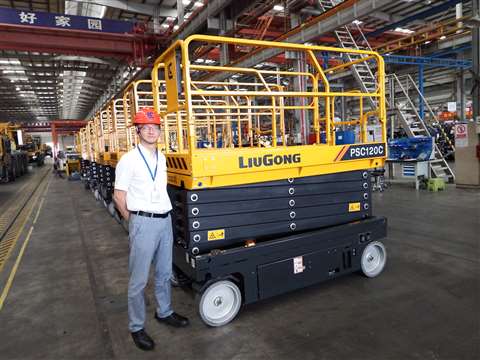 The company’s state-of-the art access production lines will be housed in the crane factory in the immediate future but could be moved to a standalone facility as an independent access subsidiary.

Its main efforts for now will be in scissor lift production, with production capacity set to reach 6,000 to 8,000 units annually by the end of next year, after a new fully-automated production line is opened in the next couple of months.The initial range will cover 6m to 16m working height scissors. The first units were produced in May, and so far 800 scissor units have been sold. Electric drive versions of the scissors will follow at the end of this year, with booms next on the list.

Guoqiang Liu, the general manager of LiuGong’s aerial platform segment, who has longstanding experience in mobile crane manufacturing at the company, said, “The core technology is the same for access a cranes. We have made a strategic move to a new products line as part of a whole new access division.”

The company also produces truck cranes in a partnership with Italy-based Isoli, started up in 2015, in which it imports Isoli upper parts and mounts them on upgraded LiuGong chassis. In addition, it has a prototype spider lift, production of which will start at the beginning of 2020 with a 21m working height model, followed by a 30m unit.