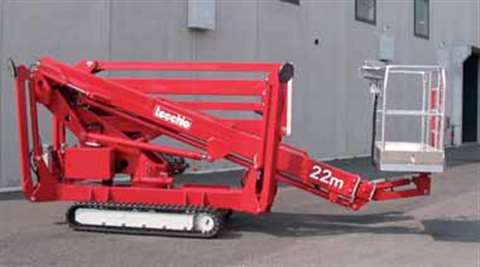 Among new Italian-built telehandlers on show was the prototype of Terexlift's Girolift 4018 rotating model. According to preliminary specifications, it will have a maximum lift capacity of 4000 kg and lift height of 18 m, putting it between the company's current GTH-3518 R and -4020 R models. It will be in production sometime next year.

Back in the aerial platform sector – there were over 20 Italian manufacturers of aerial platforms at SAIE! – Tigieffe's new six-model, Airo X2 range of narrow and wide electric scissors will replace the SF line when deliveries start in January. Working heights are from 8,3 to 14 m; capacities from 400 to 500 kg. The machines in the narrow series are 890 mm wide, while the others are 1200 mm in width. An ability to climb 25% grades and 90° steering enhance their flexibility on work sites, said the company.

Also launched at SAIE was the big brother to Braviisol's Leonardo vertical mast platform, the 6,1 m working height, 280 kg capacity Lui S.I. 400. Operators can drive the 800 mm wide, 1035 kg machine at an automatically set, slow speed while at full height. Delivery is 30 days and price is €12000.