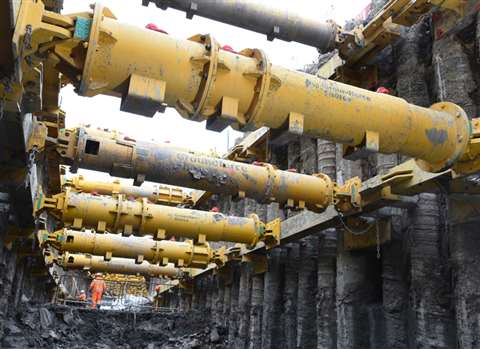 UK-based rental company Groundforce has supplied bracing beams and hydraulic struts on rent to support a tunnel project in Scotland.

Click on the image in this article to view a slideshow of the project.

Utilities company Scottish Water is building a 3.1 mile (5km) waste water tunnel in the south of Glasgow as part of the biggest upgrade of the city’s waste water network in more than a century.

The 4.7m diameter Shieldhall Strategic Tunnel, which will run between Craigton and Queen’s Park area of Glasgow, forms part of a £250 million (€317 million), five-year programme of work to upgrade the waste water network in the Greater Glasgow area.

The tunnel begins and is launched in Craigton with Costain Vinci JV is using a cut-and-cover method of tunnel construction, with this section of tunnel, extending some 190m in length, is being constructed in an excavation approximately 8m deep and 5.7m wide, within contiguous concrete bored pile retaining walls.

The construction method involved sinking the piles, then excavating the first metre or so before installing temporary works to withstand the lateral forces and prevent the piled walls collapsing as the excavation was dug to its final depth. The temporary support was required to remain in place while Costain Vinci JV cast the tunnel invert.

Groundforce was awarded the hire contract for equipment to provide this support. The company proposed a system comprising of its modular Megabrace beams installed as a continuous waling beam braced with MP125 hydraulic props spanning the excavation.

“The original plan was to excavate in sections, casting the tunnel invert before striking the temporary supports and ‘leap-frogging’ along to the next section,” explained Costain Vinci JV site manager Ian Bowley.

“But we re-phased the operation so that the excavation progressed more quickly than originally planned,” he said.

The new arrangement meant that instead of the excavation being opened in sections, the entire 190m-long trench was excavated at once.

This accelerated the programme, but in order for this method to work, Groundforce had to ensure that it could supply enough equipment to support the entire 190m excavation. The original plan was to supply sufficient support for no more than 60% of the excavation at any one time.

The support system designed by Groundforce comprised two levels of Mega Brace waling, one approximately 0.75m from the top of the contiguous piles, the other at the bottom of the excavation, approximately 4.5m below.

In total, this arrangement required about 720m of Mega Brace and 112 props to be supplied.

“This meant that we had to divert some of the hire fleet to Shieldhall and manufacture additional props to avoid shortfalls elsewhere,” explained Groundforce major projects manager Mark Whitmore.

Mega Brace beams can span substantial lengths, but the majority of the units employed at Shieldhall were 7m long. The reason for this was that instead of following a straight line, the excavation is curved, following a radius of 150m.

Long beams would describe a chord, creating wide segments across the radius of the curve. This would have the effect of narrowing the excavation and creating gaps between the bracing and the piled retaining wall that would need substantial packing.

Using more, but shorter, beams allowed the curve to be followed more smoothly, minimising the size of these gaps and requiring minimal packing to distribute the loads evenly. Each Mega Brace beam was supported with an MP125 hydraulic prop at either end and the beams were located and supported vertically by bespoke gallows brackets bolted into the concrete piles.

An additional complication was that, due to this curve, the outer side of the frame had to be marginally longer than the inner side. This was accomplished by assembling the waling beam so that nine of the 27 bays incorporated 7.5m Mega Brace beams to provide the extra 4.5m of waling beam to accommodate the larger outer radius.

As one of the UK’s leading specialists in the hire of temporary works equipment, Groundforce was able to offer the Costain Vinci JV a turnkey service which involved the supply of a temporary bridge to span the open excavation.

Installed in January 2016, two months after installation of the trench support system, this comprised an 8m modular bridge with protective canopy that follows the line of an existing footpath that provides access to a pedestrian underpass underneath the adjacent M8 motorway.

“The contractor required a pedestrian bridge with a roof to ensure additional safety for personnel” explained Groundforce Bridge manager Terry Mead. “Groundforce Bridge designed and fabricated a unit specifically for this project,” he said.

This section of project is expected tol be completed in the third quarter of 2016, with the tunnel completion set for early 2018.