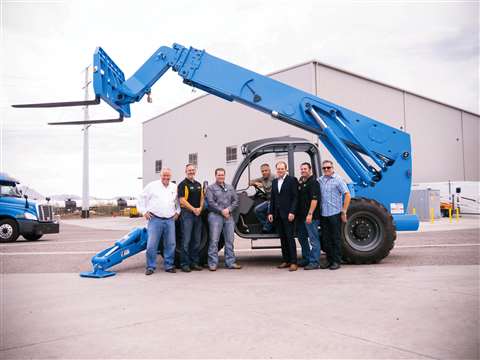 The XR1055 is now in full production in Henderson, NV, and Empire Roofing placed the order for the first six XR1055s that came off the production line, painted in Empire Roofing’s corporate colors.

Founded in 1982, Empire Roofing specializes in commercial, industrial, and institutional roof replacement, repair and maintenance. Headquartered in Fort Worth, TX, Empire Roofing operates from 11 locations in the U.S. and two locations in Mexico, with more than 700 full-time employees.

The six Xtreme XR1055 telehandlers will be deployed immediately into the Empire Roofing equipment fleet in Texas, assisting with roof replacement projects on multiple sites.

“We discussed our material handling needs in detail with Kevin and Rex, and we found that the new Xtreme XR1055 hit our sweet spot for lift capacity and lift height,” said Ronnie McGlothlin, founder and president of Empire Roofing. ”The build quality of the Xtreme telehandlers was also a big draw for us, as we manage our own fleet and need equipment that is built to last and will handle the tough demands of our jobsites. I believe in purchasing the best equipment available, which ultimately benefits my employees and customers.

“These six units will be deployed for many jobs, including delivery of roof top equipment, safety equipment and materials. We take jobsite safety seriously, and features like the 360-degree operator visibility from the cab will make a big difference to our operators. We also have multiple tasks where we can utilize the built-in machine-rated boom lift point to improve productivity. We are excited to be the first customer for this new model and look forward to getting them onto our current projects.”

Robby Hagan, senior VP of sales for Xtreme Manufacturing, said, “We sincerely appreciate this opportunity to deliver Xtreme telehandlers to Empire Roofing. We are grateful to Ronnie and his team for putting their trust in Xtreme and for being the first customer for our latest model. We are confident that the Xtreme XR1055’s will be a great addition to their fleet and look forward to developing this relationship in future.”