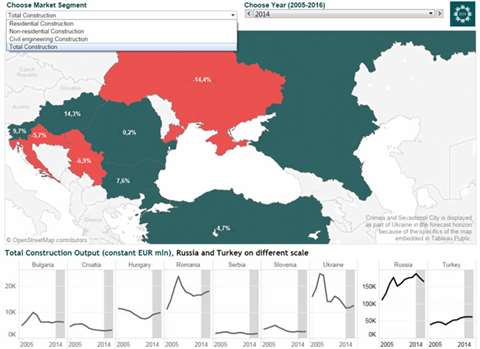 An interactive version of the EECFA Winter Forecast is available

By 2014, the construction market in Eastern European was estimated to have a 20% share of the total European market in financial terms, with around €300 billion spent on construction in those countries.

The figures have been compiled by the EECFA, the construction forecasting research co-operation of national research institutions in Bulgaria, Croatia, Romania, Russia, Slovenia, Serbia, Turkey and Ukraine.

It said that in the last 10 years, the region had managed to double its share. Almost uninterrupted growth in the two biggest markets, Russia and Turkey, was said to have contributed at one end, with a shrinking overall market in Western and Central Europe since 2009, at the other end.

The buildings sector – both residential and non-residential – was responsible for an average of around 60% of construction in the 2009 to 2014 period in the Eastern region, while they had an almost 80% share elsewhere in Europe. The EECFA said this showed that in the emerging regions of Europe, infrastructure-related construction was more dominant relatively.

It said that filtering out the construction cost differences between the regions and comparing the performance of new building construction in terms of units showed a different picture, with the Eastern region, led by Russia and Turkey, taking over the leading role in terms of number of dwellings completed.

It was found that in 2014, just over 1,900,000 dwellings were expected to have been completed, with over a million in Russia alone.

The EECFA said this was 45% more than in Western and Central Europe together.

It added, “When it comes to non-residential buildings, the best comparison is the built-up floor area. In the eight Eastern countries we are covering, close to 80 million m2 is estimated to have been put into operation, while the corresponding figure (2013) for the rest of Europe is 190 million m2.”

It said the situation was about to change in the next few years, though, and suggested that 2014 would probably be the peak year in the Eastern region for a while, when considering the region as a whole.

The Russian construction market was predicted to suffer, with the loss not counterbalanced by the growth potential it saw in smaller, Balkan countries which were at the bottom of the cycle in building construction.

Although it said it was still optimistic about most segments in Turkey, it expected a turn in the forecast for the residential market. It said that because of its exceptionally large share, this could drag the whole market into a negative position.”

An interactive display of the EECFA figures can be found at eecfa.com.

Figures for the Eastern region came from EECFA’s latest Forecast Reports, issued on 20 December, 2014. For the rest of Europe, aggregated figures from Euroconstruct’s latest reports, issued on 19 November, 2014, were used, with estimates prepared by Buildecon for a presentation at the 78th Euroconstruct Conference in Milan, Italy. The interactive display was prepared by Buildecon, EECFA Central.