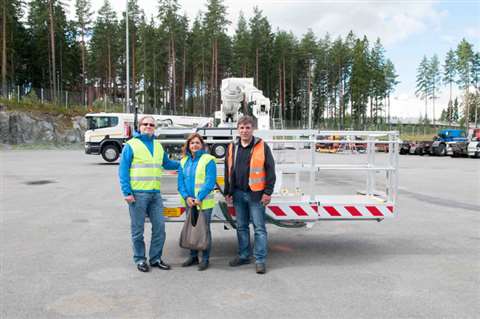 Roland and Monica Berteit, with their new Bronto S70XR truck mount, next to Thomas Mayr from Bronto Skylift.

Of the 100 units in its fleet, including scissors, crawlers and truck mounts, Berteit has eight truck mounts. Until now its highest truck mount was a 45m Bronto. Before that Berteit hadn’t owned Bronto machines since the 1990s – it was founded in 1994.

The investment in the S70XR followed negotiations with several co-operating rental companies in the area which also had a requirement for the machine. Roland Berteit, company co-owner with Monica Berteit, said it bought the 70m machine due to its 32 tonne weight and less than 12m length. “This is very important in Germany, as it means we won’t need to acquire any special permission to drive the unit around.”

The compact size of the model was part of Bronto’s plan to acquire the EC wide whole vehicle type approval (WVTA), which also makes registration and resale easier for the customer. Both units in the Bronto XR range, S56XR and S70XR, now have this type approval.

The S70XR was also chosen for its remote control system and the material handling boom winch. In addition to the 1100kg boom winch the Berteit unit has a lighter 400kg winch in the extendable working cage, element lifting system and an additional generator.