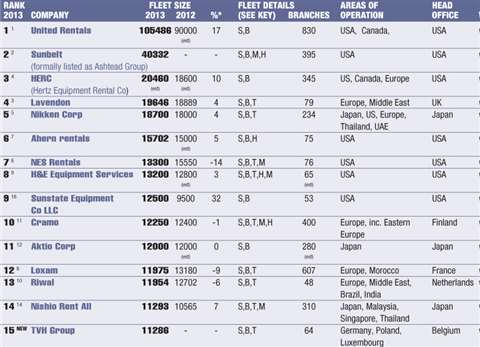 There was marginal growth in the Access50 2013 list of the world’s biggest powered access equipment rental companies, by fleet size, along with some notable indications for the industry.

Despite this continued rise, the 2013 Access50 highlights a worldwide uncertainty, caused by the unpredictable economy in Europe and in some emerging markets. The US bucks this trend somewhat with a renewed confidence in its rental sector. As if to demonstrate this, United Rentals leads the way in first place, above six other US-based companies in the top 10.

United Rentals' 105486-strong rental fleet of access equipment not only towers above its nearest rival Sunbelt, but marks something of a landmark, as it is the first time a company has passed the 100000 mark. The 2013 Access50 list was also the first time Ashtead Group had split the fleet figures for its companies, Sunbelt, in the US, and UK-based A-Plant.

Looking to Europe, Lavendon Group retains its position in the top five, with a modest 4% growth on its fleet size in 2012. Further down the table Cramo moved up one place to 10th, despite a 1% drop in its fleet size. Loxam and Riwal, on the other hand, fared slightly less well, with 9% and 6% reductions in the their fleets, respectively, bringing them both just outside the top 10.

In Japan, the story is one of stability. For example, Nikken Corp, retains its top five position with an increase of 4% fleet size. Nishio Rental All, which retains its 14th place from last year, shows a 7% rise in its fleet size.

In South America, Brazil’s two biggest access equipment rental companies display different signals. Mills, in 30th position has significant growth with a 23% bigger fleet size. It moves ahead of Solaris, which held the 30th spot last year. This year Solaris is in 36th place with a fleet reduction of 16%. It is worth noting that in the 2012 listing Solaris shows a 100% fleet increase on the 2011 list. So, it is possible the figures demonstrate an evening out of fleet sizes to reflect the true state of the market.

There are also a number of new entries in the 2013 list, including Singapore’s largest access equipment provider Galmon, in 40. Kimberly Group in the UK, and Skyreach in Australia, are two other notable new entries, in at 48 and 50, respectively.

Access International, the publisher of the Access50, would like to thank all those companies that took part in the list this year. If your company has more than 1000 pieces of access equipment in its rental fleet but is not in this year’s listing, then please take part in the Access50 2014. Look out for details about how to enter nearer the time.