What are the top rental stories of 2022 so far?

This year has seen a period of uncertainty for many industries, including rental, which is perhaps understandable given the impact of the war in Ukraine and supply chain issues.

The units were manufactured by POWR2 specifically for the company and comprise of lithium batteries and inverters which will provide power outputs ranging from 40 to 60kW, with between 60 and 120kW hours of storage.

The European Rental Awards took place in Riga, Latvia in June. A shortlist of nominees for the prestigious awards was revealed prior to the event, with eight awards handed out in a number of categories, including Rental Product of the Year, Best Digital Innovation of the Year and Rental Person of the Year.

Read the July/August edition of International Rental News for a detailed review of the Awards and Convention.

3. IRN releases list of top rental companies in the world

Every year, IRN publishes a comprehensive list of the top 100 rental companies in the world. This year saw United Rentals take top spot for the second year running.

Based on revenues from 2021, the IRN100 revealed China as the fastest growing market in rental, with three of the top five companies who have experienced the most growth all coming from the country.

The likes of Loxam, Boel, Herc Rentals and Aggreko also feature in the top 10 this year, with only one company dropping out of the top 10 when compared with last year.

The full IRN100 ranking is available in the June edition of International Rental News.

In April, analysis by KHL Group found that almost half of new equipment launches in 2022 were electric.

Through the analysis of four online databases produced by KHL; Construction Sourcing Guide, D&RI Buyers Guide, Access Buyers Guide and World Crane Guide, it was revealed that of the 75 new launches that were added to the guides in 2022, 36 were powered by electric.

Further analysis revealed that from February 2021 to April 2022, roughly 5% - 6% of new machines were electric when excluding aerial platforms, which makes up a large amount of the new electric products.

Aggreko announced the decision to leave Russia in March this year. (Photo: Aggreko)

The Russia-Ukraine conflict is undoubtedly the biggest story of 2022. Its impact on society, business and economics is likely to have impacted most industries around the world in some respect, so it is perhaps no surprise that the decision of power rental company Aggreko to withdraw from the country features on this list.

The withdrawal and planned sale of its Eurasian business was seen as the first major response from the rental sector to the conflict, with the company commenting at the time that there will be “no investment in the Eurasian business before the sale and it would be ring-fenced for financial purposes.” 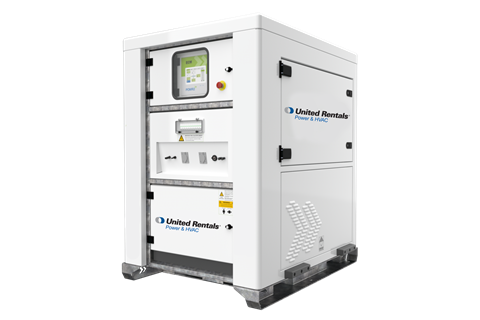