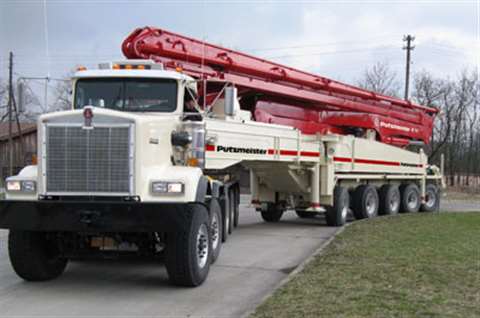 With a 70 m vertical reach, Putzmeister's M 70-5 is the biggest truck-mounted concrete placing boom in the world.

Putzmeister is celebrating its 50th anniversary in style with the launch of the largest concrete truck pump in the world, the 70 m vertical reach M 70-5. The first machine off the production line has been bought by Associated Concrete Pumping of Sacramento, California, US.

This machine is fitted with a two-cylinder piston pump capable of 200 m3/hour. Roading regulations in the US mean this particular unit is mounted on a 10-axle semi-trailer. The version planned for Europe will have a different chassis configuration.

The customer has selected a 370 kW Kenworth C500B (10 x 6/4) as a tractor unit. Of five axles on the tractor unit, three are driven fully suspended and two of them are hydrostatically driven (for slow speed over rough terrain). Two axes are steered. The configuration gives the unit a turning radius of just less than 18 m.

The boom itself is a five-section roll/z-fold unit, providing a maximum vertical reach of 69.3 m and a maximum horizontal reach of 65.1 m. The boom can fully unfold within the footprint of the machine, and the machine can also be operated with Putzmesiter's One Sided Support (OSS) system for cramped sites.

The M 70-5 is also fitted with the company's Ergonic Boom Control (EBC) system, which allows the boom to be more easily controlled with a joystick, and which also reduces vibration at the delivery hose. Ergonic Output Control (EOC) meanwhile saves fuel by automatically adjusting the engine speed to match pumping output.

Other high-tech features include Ergonic Pump System (EPS), an electronic controller for the concrete pumps' hydraulic drive, which improves efficiency and Ergonic Graphic Display (EGD) - the visual interface for the remote control and control cabinet. 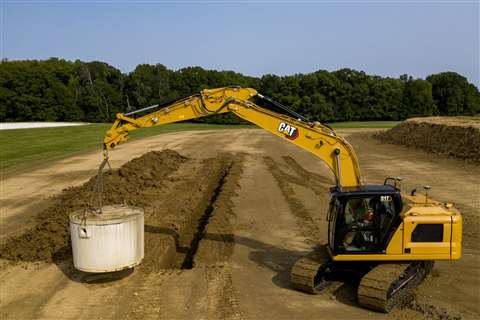 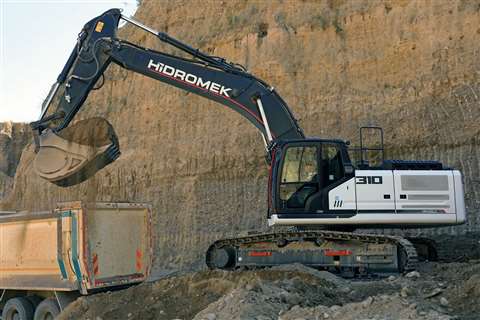