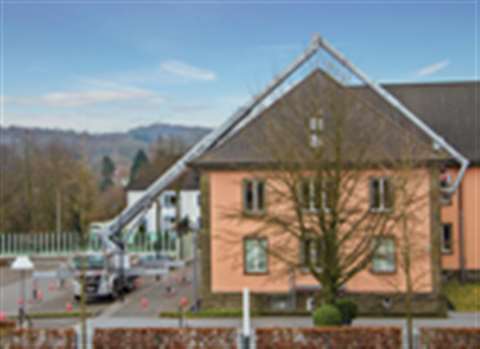 The 57m working height Ruthmann highflex Steiger T 570 HF was launched at Bauma, along with the T 510 HF from the same range. The latter has a 51m working height combined with 33m outreach, placed on

Tim Whiteman, CEO and managing director of the International Powered Access Federation (IPAF) says the rental sector already purchases more than 80% of all AWPs built each year – with IPAF research showing there are about 1.2 million units owned by rental companies around the world.

He said, “The rental industry is the life blood of the global access industry. It provides a way for companies to quickly obtain a professionally maintained solution for temporary work at height."
The biggest markets for access equipment remain in Europe and North America. According to IPAF, both continents are experiencing steady growth, although in Europe the conditions vary greatly from country to country.

The US report recorded moderate growth of 5% in 2015 to reach approximately US$8.3 billion (€7.4 billion), while the total rental fleet expanded by 3% to exceed 530000 units. Nevertheless, this market has been affected by the slowdown in the oil sector, and as a result the proportion of construction end-markets in AWP rental increased to 73% in 2015.

This slowdown follows enormous growth in AWP fleets in recent times. According to IPAF, there was around 22% growth in rental fleets between 2011 and 2015. But that curve has trailed downwards, and is forecasted at zero for 2016.

One of the largest access equipment manufacturers in world, JLG’s parent group Oshkosh, said earlier this year it was lowering the access equipment segment’s outlook for the year following the results of its first quarter of its 2016 financial year. This reflects what it believes will be a more cautious approach to capital expenditures by rental companies than previously anticipated and a more competitive market, due in part to the continued strong US dollar.

And John Garrison, the new CEO of Genie’s parent company Terex told KHL at the American Rental Association show in Atlanta in February that he didn’t see market conditions improving. He anticipated lower fleet replacement from North American AWP rental companies. And he said the oil and gas and commodity market decline will continue to impact demand across many of its products.

Meanwhile, IPAF’s European rental report shows a 3% revenue rise in 2015, estimated at €2.7 billion. Fleet expansion continued at a moderate pace to reach 313000 units. The report says Spain and Italy are seeing the highest growth - well beyond the recession with growth at or above 5% in 2015. This shows considerable progress compared to previous years when revenue declines were the norm.
Sweden and Germany remain growth markets with continuous positive growth at 5%. In comparison, the UK and Norway, traditionally dynamic markets, are showing signs of slower growth.

By comparison, China’s rental fleet grew by about 35% in 2015 to reach approximately 12200 units, according to IPAF’s findings.
This represents huge growth but from a low base in a country that boasts up to 200 aerial work platform manufacturers. In reality there are only around 10 manufacturers that show international aspirations, with most of the others being very small manufacturers of scissor lifts sold in their immediate locality.

Of the top 10, Zhejiang Dingli Machinery (Dingli) has made the first real move into Europe with the purchase of a 20% share in Italian telehandler manufacturer Magni, finalised in February this year.

Under the €14.4 million deal Magni will design a full range of booms for Dingli, which will produce them at its new factory in China. In turn, Dingli is to be a distributor for all Magni products in China.

While huge growth beckons in China and Asia generally, achieving a foothold in the mature markets of North America and Europe is high on the list of any aspiring international player. Conversely, manufacturers based in those established markets are keen to find sales in smaller markets that promise future growth.

One such company is Germany-based Ruthmann, a specialist of premium-priced truck mounts, mainly sold in Europe and significantly its domestic market. In a bid to spread its wings, the manufacturer bought a 60% stake in Italy-based Marti Group, a producer of Ram truck mounts and Bluelift tracked platforms.

The arrangement sees the Marti family holding on to the remaining 40% and jointly managing the venture, which has been renamed Ruthmann Italia.

The reasoning behind the deal reflects a broader trend in the AWP sector. Ruthmann managing director Rolf Kulawik says it had been looking for a truck mount manufacturer to provide lower-priced, more basic machines to emerging markets. “The products are important for our strategic approach in new markets in Eastern Europe, Southern Europe, USA, India, the Far East and Middle East.”

As a result of the partnership the Ram name will no longer exist, and its products have been renamed the Ruthmann Eco line. The well-known Bluelift name will not be dropped, instead it has been rebranded Ruthmann Bluelift.

The acquisition was announced at Bauma Munich in April, where access manufacturers were out in force with a number of new products. They included the access equipment sector’s two biggest manufacturers - JLG and Genie (part of Terex AWP).

Terex AWP is celebrating its 50th anniversary this, and new products on its booth included a Z-boom designed to offer high rental return on investment. The 15.9m working height Z-45/25XC boom lift is a redesigned larger capacity version of the Genie Z-45/25J RT diesel-powered articulating boom with up to 100% more lift capacity. Standard basket capacity is 300kg as standard, while restricted capacity is up to 454kg. The machine weighs in at 440kg with new design features including a new 1.83m dual-entry platform and reinforced components to support additional weight.

Raising the bar in the articulated boom area was JLG, with the launch of the world’s biggest version, the 1500AJP. The first unit was sold on the manufacturer’s stand at bauma to the Netherland’s-based access equipment rental specialist Riwal. It features include an up-and-over height of 18.3m, a working outreach of 23.5m and platform capacity of 270kg unrestricted and 450kg available through a vast majority of the working envelope.

The 1500AJP, which will be available for shipment in early 2017, also offers a standard 2.4m jib that raises and lowers 135 degrees to provide additional reach and up-and-over capability.

In another acquisition update, Power Towers, a UK-based manufacturer of low level access equipment bought in 2015 by JLG showed its products represented on the JLG stand at Bauma.

Related products will still be branded as Power Towers in markets outside North America, while in North America they have been re-branded under the JLG name with new nomenclature.

Another of the four biggest access equipment manufacturers, Haulotte Group, is also realising the significance of the low level sector. The France-based manufacturer launched the 5.8m working height Star 6 vertical mast. The Star 6 follows on from the Star 8 and 10, launched last year. Star 6 is designed to work in confined working areas, and the new machine was launched in a bid to increase its presence in this area.

This expanding product ranges from the world’s leading access equipment manufacturers demonstrates the need to offer a broad choice of products to its rental customers. Essentially, the focus is on flexibility and ease of use on the worksite; for example hybrid machines can be used inside and outside and can be present on a construction site from the beginning to the end of the project. Emissions, whether fuel- or noise-related, are also working their way up access equipment buyers’ lists.

All this demonstrates that while these manufacturers are still focused on the high volume scissor and boom lines, they are making more of a noise about niche products. Similarly, specialists in lower volume product lines are typically exploring new areas. For example Finland-based Dinolift, which has traditionally manufactured trailer mounts, but also produces tracked platforms and booms, has been pushing the boundaries of the latter with, again, flexibility being the focus.

Last year Dinolift launched the Dino 220XSE boom lift, which seconds as a remotely operated telehandler with a 500kg capacity. The boom has an extra-large basket, 1.3m x 2.4m, with 350kg capacity to carry three people and extra tools. At Bauma, its features were extended to include optional outriggers for use on slopes up to 12°and for it to be levelled horizontally.

Meanwhile, telehandlers play a complementary role to AWPs and an important role in rental companies' fleets.

This year Skyjack introduced its Tier 4 Final TH series of telehandler and represents a serious attempt to rival the likes of JLG and Genie for which telehandler sales are significant proportion of their business.

Skyjack president, Brad Boehler, said the company is “very serious about being in the telehandler business. We are working on new models that will be released soon.”

This is a feature from the June 2016 issue of IRN. To read the full article, with extra images and information, subscribe to the magazine: http://www.khl.com/subscriptions/magazines/international-rental-news/